Man who damaged Christmas tree and fairy lights outside the branch of Walton and Hipkiss in Birmingham has now sent a letter of apology and paid £30 to replace the lights following social media outcry.

An estate agent whose branch Christmas tree was vandalised by three men late at night has been sent an apology and £30 towards a new set of fairy lights.

On Saturday November 30 three men were filmed by the estate agent branch’s CCTV (see below) in the early hours of the morning at first shaking the tree outside the branch of Walton and Hipkiss in Birmingham and then ripping its fairy lights off.

The distinctly un-festive actions of the vandals led to an outcry on social media after company boss Andrew Hipkiss (pictured, above) posted the CCTV footage on Facebook.

Police then identified the lead vandal in the video and officers spoke to him earlier this week and he agreed to write a letter apologising for his actions. 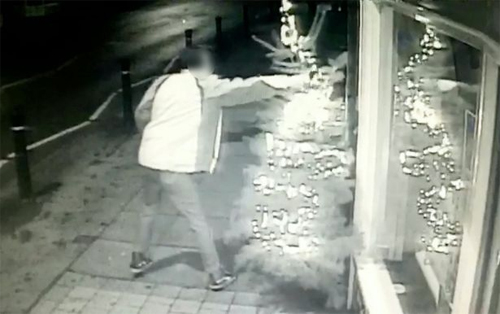 “The person who pulled the Christmas tree lights off our Hagley office has now been found,” the company, which is celebrating its 90th anniversary this year, says.

“We have accepted his apology and he has paid for the replacement lights. Thank you for your incredibly amazing support in sharing the CCTV video footage.

“It just goes to show what power social media can have, which enabled the national newspapers and the police to contact us. Thank you for all your support.”

Inspector Mark Chappell told local media: “Whilst in the grand scheme of things this was a relatively small incident, we could see by the comments online that our local community were disappointed by this mindless damage.

“Therefore we took a proactive but proportionate approach to identifying the man involved and, we hope, returning some Christmas cheer to the village.”