Hidden skills help him cook up a storm to win last week's episode. 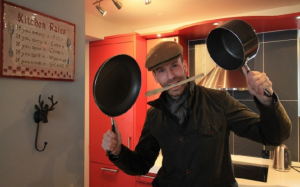 James Sawyer, who works at the Bury St. Edmunds branch of estate agent Whatley Lane, has proved that he is the host with the most, winning Channel 4’s Come Dine With Me competition.

James produced a fine dining menu with wine pairing for each course.

“I have a passion for cooking, enjoy watching the show, entertaining guests and meeting new and interesting people. Channel 4’s casting team called the office one day asking if I knew anyone who would be interested in competing… the rest is history,” he said.

“I didn’t expect to pick up the £1000 cash prize, let alone be selected to go on it and made friends along the way too. Though each contestant was given £125 for food and drink, most of my winnings covered the cost of ingredients and copious wines on the night.”

James had to cook for the three other contestants, wedding DJ Phil Swapping, American housewife Julie Schindler and tennis enthusiast Paula Brown, at his home but he says he did not expect to win because he though one of the others had done so much better, but his fellow diners thought otherwise. “I thought she had it in the bag,” he said. “I was blown away – I was humbled by it.”

A long been a fan of the programme, he decided to see what he could do. He told viewers, “My tastes are simple – I’m only satisfied with the best.” “I love cooking,” he said. “I have a passion for it and wanted to see what my other guests thought.”

James was featured in the first episode of the new series, in and around Bury St. Edmunds, pitched against a West Indian cuisine and an American ‘Hootanany’ themed evenings.

“My menu consisted of classic cooking methods, good quality local ingredients and novel presentation. Basically my favourite food that stands out the most from travelling and restaurant dining. But you definitely don’t account for the pressure of attempting to cook it on camera!”

If you missed it (where were you?) you can watch James’ episode on Channel 4 Catch up on 4oD.