An estate agency firm operating out of a former pub in North West London has been given 28 days to get out. 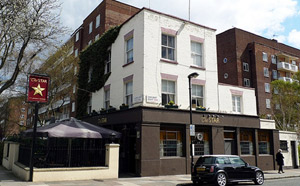 An estate agency operating out of a 200-year old pub has been ordered by Westminster Council to vacate the premises this month or face formal action.

The freeholder of The Star pub in St John’s Wood, West End Investments, decided to close the 200-year old pub earlier this year after acquiring the business in 2014, and let the premises to Champion Estates, sales and letting agents, in March after being refused planning consent by the local authority to convert the property into luxury flats.

Addressing the press at the time, Gary Champion, Director of Champion Estates, said, “I’ve had people coming in asking for a beer and going away disappointed. It was a business, not a public service. We’re entitled to make a living like everyone else.”

However, the decision to close the pub and replace it with an estate agency sparked outrage among many local residents and drinkers, which included music singers Sir Paul McCartney (left) and Liam Gallagher (below), especially as Westminster Council had listed the pub an Asset of Community Value.

But the preservation order issued by the Council was described as useless by Tom Stainer, of the Campaign for Real Ale, who said, “This is just the latest in a long line of pubs converted due to a loophole in planning law.”

Westminster Council told the press in April that it recognised the “importance of the pub”, which is “why we designated it an Asset of Community Value”. But added that legislation setting out what this status means “recently changed”, and so it set out to establish facts to determine if any action could be taken.

But having now considered all of the evidence available, the Planning Officer investigating the current situation at The Star in St John’s Wood is of the opinion that a material change of use requiring planning permission has taken place at the site.

Consequently, the planners have now written to the freeholder and the tenant requesting that the pub ceases to be used other than a public house within 28 days, otherwise formal action will be considered.

The ruling has been welcomed by Karen Buck, the Labour MP for Westminster North.

“I welcome the council taking tough enforcement action and have been pressing them on this since The Star closed,” she said. “Landlords and developers must learn that they are not free to do as they wish regardless of planning rules and safeguards – however limited.”

However, the Council cannot force the owner to open as a pub, but only a pub use will be lawful. If the owners fail to cease using the building other than as a public house, and if an enforcement notice is served, the owner will have a right of appeal, which undoubtedly it will.

Addressing the press in April, a spokesperson for West End Investments said, “The landlady took the decision to retire. The lease [issued to Champion Estates] was signed in full compliance with laws and regulations.”

Petition calling for commission to be included in furlough scheme launched