Fergus Lindsay's brochure comedy gold was prompted by a desire to preserve his 'sanity and for amusement'.

An estate agent in Glasgow has made national headlines after employing some hilarious copy in a property listing.

Fergus Lindsay works for Connells-owned Slater Hogg & Howison in the city’s central districts and caused a stir this week after posting a Rightmove listing online for a £19,000 car parking space within a multi-storey facility.

The listing, which remains unsold, says: “You have to, albeit grudgingly, admire the uncanny efficiency of the Traffic Warden with their almost supernatural ability to materialise from thin air as if beamed from the Parking Enforcement Deck of the of the USS Enterprise.

“If you are tired of neck stretching and swivel heading, dancing the parking fandango, misdialling Ringo or searching down the back of your passenger seat for loose change then this secure, gated, undercover and CCTV observed private parking space is just the solution to your travails.

“Perfectly positioned in Merchant City central this is the prime garage to rest your four-wheeled friend.”

The pictures that accompany the listing for the space at the Albion Street car park include a photo of the current owner’s Jaguar sports car. 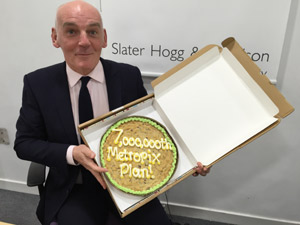 Lindsay told The Mirror newspaper that he wrote the creative copy for his own ‘sanity and amusement’ after 30 years within the industry and that he “always tries to get a slightly different perspective. It’s difficult to know what to say about a few square yards of concrete,” he said.

This is not his first brush with fame – in 2015 he created the seven millionth floorplan using the Metropix platform (see pic).

His efforts will remind some agents of Roy Brooks, who made his South London firm famous for its amusingly honest ads during the 1960s.