Sign in or Sign up
The essential site for residential agents
Home » Supplier advice » Fake news!
previous next

What is ‘fake news’? How should CEOs in estate agency deal with it? James Staunton has some answers that could save your reputation. 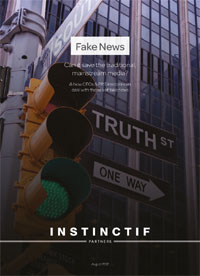 Fake news has been a huge topic in the media since use of the term exploded in the last quarter of 2016, most notably promoted as a phrase by US pumpkin-in-chief Donald Trump. How should leaders in the estate agency industry deal with the phenomenon?

In its new white paper (download below), Instinctif Partners offer some advice to the estate agency C-suite on how to guard against becoming the victims of fake news.

Of course, CEOs might not think this is a problem that they need to address.

Wrong; the property industry could easily find itself a victim of fake news. Publications that knowingly exploit the facts to suit their own prejudice, including hyperpartisan alt-left outlets like The Canary have looked at housing associations before as well as the buy-to-let space in London. Another Angry Voice, another alt-left politics blog, has looked at the mortgage industry as well as the ‘UK property bubble’. Estate agency is not outside the purview of these sites.

It’s critical to engage with mainstream media, both business and national.

The British public is certainly nervous with 54 per cent saying that the UK has a problem with fake news. And the workforce is anxious, too. We asked employees how worried they thought their employer should be by the potential detrimental impact fake news could have on their brand – almost half (46 per cent) said “they should be concerned”. There are implications for larger agents’ internal communications strategy and employer branding if nothing else.

So, what’s their best way forward?

First, it’s critical to engage with mainstream media like The Negotiator. Radio, TV, and newspapers (online or in print) are trusted more than the Twitter feeds of independent users not associated with the traditional media or their Facebook pages. Partisan blogs are trusted even less. Executives need to develop relationships and work towards becoming trusted commentators in the sector. But don’t expect to treat quality journalists like your in-house magazine. The rise in fake news has made readers more likely to read a media outlet that sets out both sides of a story – even if they disagree with one particular side of the argument (while 57 per cent said they agreed said they were now more likely to turn to outlets that gave both sides of the story, only 6 per cent said they were not). Scrutiny of your side of the story should be appreciated as a strength, not a weakness.

Second, CEOs should leverage their own websites and social media channels to ensure they are putting their best foot forward with core audiences. They might think this is icing on the cake, but our research shows the websites or social media feeds of companies and government departments (even political parties) are trusted more than partisan blogs. Employee advocacy platforms like GaggleAMP will help you engage your employees on social media as well as solidifying and maintaining your upstream marketing efforts throughout your digital marketing channels.

Third, there’s dilution. If you do get stung by a fake news site, you don’t want the story sitting at the top of the google rankings forever, bad news has a long shelf-life. You need to develop a strategy to present a different image. For that, you will need fresh content to knock the original story off the top spot – you need to do interesting things – research presenting you as a thought leader in your field), tell big news sites about those interesting things, then repeat. Google is looking for new content and it will rank it. Another efficient tool to generate a positive stream of messages is to institute regular blogs. That will have an SEO benefit, too.

Fourth, harness both the power of the unregulated internet and the reputation of the traditional media with boosting – the practice of paying online social media and social networking services such as Facebook to promote favourable articles from mainstream media or favourable reviews of their service from similar trusted sources. As BuzzFeed has pointed out, promoting positive coverage on Facebook isn’t a particularly new strategy, but it seems to be gaining steam of late. Given how powerful the original content is, it deserves to be promoted to 10 times or 20 times the original publisher’s audience.

Are your overseas landlords being put at risk?

How to create the industry-leading estate agents of the future