First time buyers are back in the market

Figures from mortgage industry show number of first time buyers loans rose by nearly a fifth over past three months.

First time buyers are back with a vengeance borrowing £5.9 billion in June, up 26% on June and 9% on the same month in 2016, the Council of Mortgage Lenders latest figures show.

The increase is on the back of first time buyers taking out 36,000 loans in June, 22% more than the month before.

The increase is more than a blip. Figures from the CML, which is soon to be renamed UK Finance, show that during the second quarter of this year first time buyer borrowing increased by 18% taking out 91,400 loans.

“June’s figures show a busy month in the mortgage market, with home movers having their highest monthly activity levels for over a year and an especially high number of loans for first time buyers,” says Paul Smee, Head of Mortgages at UK Finance (pictured, left).

“But there are also signs of a softening market and we are not anticipating that this performance will be sustained in the second half of 2017.”

Home buyer borrowing also jumped during July, increasing by 26% month-on-month and 15% year-on-year although buy-to-let borrowing remains subdued, but still rising, by 3% both by month and year comparisons. 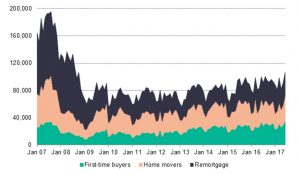 But research out from online agent Hatched paints a different picture. It says the number of first time buyers in the market has dropped by 27% over the past 17 years, and that the average deposit is now £20,000.