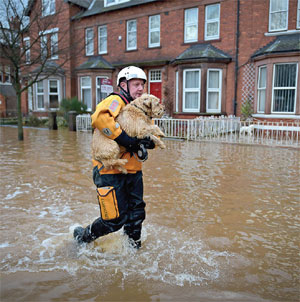 The world has experienced severe floods ever since Noah was worried (around 2348 BC), but while Noah had to build his Ark, the modern world has insurance schemes.

However, flood-hit residents and insurance companies have not been great friends in recent years, so we now have a new scheme called Flood Re, which was launched on 5th April. The ‘Re’ means reinsurance, which is a way of syndicating the cost amongst participating insurers. Flood Re is a not-for-profit organisation, directly accountable to Central Government and responsible for single peril re-insurance (flood risk).

Flood Re offers more protection to owners in flood risk areas but it adds another layer of complexity to the homebuying process.

Its purpose is to ‘secure available and affordable insurance against flood risk. Premiums will be capped, but, equally, they will be ‘market driven’ as will the excesses. Translated to consumer language, cynics may say that means they will be set at whatever the insurers believe they can get away with. However, the Government has supported this new initiative, and, along with the insurers, has been busy telling us all how much it will protect those poor souls whose homes have been repeatedly flooded and at the same time, protecting those who may be flooded in the future.

HOW WILL FLOOD RE WORK?

Insurance companies which join the scheme will be able to pass on the flood risk element of eligible home insurance policies to Flood Re. Flood Re will charge the insurers a premium for each policy, based on the property’s council tax band. It is estimated that insurers will pass on the flood risk element of buildings, contents or combined home insurance policies for around 350,000 households.

The assessment of the level of flood risk is not part of the decision making process as to whether a property is eligible to benefit from Flood Re.

To be eligible for Flood Re the home must have been built before 1st January 2009, be insured by the individual homeowner (not a company) and have a council tax band. If those key conditions are met then homeowners will be able to benefit from Flood Re provided that they choose an insurer that is participating in the Flood Re scheme.

HUNG OUT TO DRY?

So Flood Re sounds good for many many people, but then there are the exclusions.

Landmark Information Group, supplier of digital mapping, property, land and environmental risk data, announced that all of its residential flood risk reports now include updated insurability guidance in light of the launch of the Flood Re reinsurance scheme.

Landmark’s RiskView Residential, HomeCheck Professional Flood, FloodSolutions Residence, SiteSolutions Residence and the Know Your Flood Risk reports include a High, Moderate or Low flood risk rating, and provide a view on whether insurance is both available and affordable for the given address – whether it’s via Flood Re for the most ‘at risk’ properties, or via the general market for the lower risk addresses.

Rob Phillipson, Sales and Product Director said, “More than ever before consumers need clear advice on the level of flood risk at a given address. By being armed with the best possible information, they can make better informed decisions when purchasing a property so they enter a transaction ‘eyes wide open’; we offer a suite of reports to ensure appropriate assessment is available for every type of transaction.

Greg Bryce, Managing Director of SearchFlow, agreed, “Whilst the Flood Re scheme will offer much needed protection to homebuyers purchasing properties in flood risk areas, it has certainly added another layer of complexity to the home-buying process. This initiative has sharpened the industry’s focus on flood risk assessment prior to a property transaction. It is now very important that we provide flood reports that define the potential to cede properties into Flood Re and outline clear guidance on what it means for the homebuyer and their insurance availability.”

How to boost your agency’s profits with extra revenues streams