Footballers’ homes for all… in Luton

Footballers have dreams too. Ferdinand, Zamora and Nobel plan to build thousands of new homes 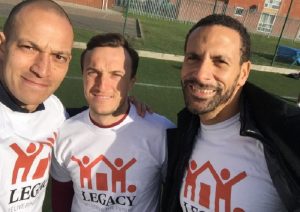 Footballers have dreams too. Now, Ferdinand, Zamora and Nobel are making their dreams come true, building 1,300 ‘Footballers’ homes’ for private and social renting.

Bobby Zamora (Brighton), Mark Noble (West Ham) and Rio Ferdinand, now retired, may live in luxury now, but they all grew up on London council estates and now they are ‘giving back’ with their new project to build private and social and rented housing.

The project has been launched through the Legacy Foundation, the brainchild of Rio Ferdinand, who grew up on a council estate in Peckham, south-east London, and it will work with his youth services foundation.

While plenty of other footballers’ homes are glitzy mansions, these three say that they want to help tackle Britain’s housing crisis by building thousands of affordable homes across the country, complete with sporting academies where they will offer coaching to youngsters.

Mark Noble, from Canning Town, east London, who started at West Ham aged 13, said, “At first we were thinking 20, 30 homes, but then we realised that wouldn’t make a difference to anyone. We want to make a big difference in housing.”

The Kingsland site in Houghton Regis near Luton, will include a creche, a leisure centre with a gym and swimming pool and a sports academy, where one of the trio will be training local kids once a month. Sport will be at the heart of them – not just football, but also netball and hockey.

The footballers plan to pour some of their own wealth into the project once it has been built – at least £300,000 every year, between them, to fund management costs, repairs and community leaders’ wages. Noble said it could be more. “We will subsidise the creche, football facility, yoga and art studios, and the gym,” he said. 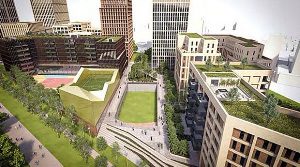 Kingsland is moving “at a hell of a pace”, according to Jason Longhurst, director of regeneration and business at the local council. The footballers’ scheme hopes to break ground sometime next year and the first residents could move in a year later. “We are helping shape this so it’s a viable model for elsewhere,” Longhurst added.

Richard Walsh, a director of property agents Colliers International who is providing the property development and financial expertise to Legacy, said McLaren Property would build the homes.

The plans, which are subject to planning permission, envisage 1,297 rental homes at Kingsland, including 546 private apartments and 200 private houses (the rentals of these will subsidise the affordable housing); 400 social and affordable apartments and 200 social and affordable houses. They will all be built to the same specifications, without segregation or “poor doors”. About 450 units will be family homes with three bedrooms or more.