Formerly the premises of Lilys Lettings and Sales, the building has been taken over by campaigners and anarchists.

The branch of a former estate agency in Cardiff has been taken over by anti-capitalist squatters who put signs up in Welsh that read ‘destroy landlords’ and in English, ‘No State Agents’ (see pic below)

Formerly the branch of local estate agency Lilys Letting and Sales, the squatters are refusing to budge and have prevented the premises being sold at auction for £120,000. 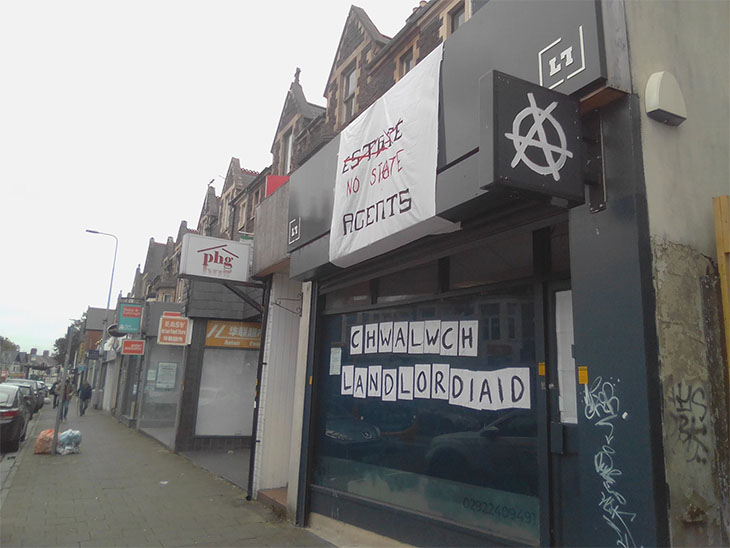 Lily’s Group Ltd, which traded as Lilys Lettings and Sales and was registered at the branch address, was dissolved in September last year and the branch has sat empty ever since.

The area is near the centre of Cardiff, and the modified branch window and frontage are a major eyesore on a road, as well as an annoyance to agents in the area.

Lilys was one of eight agents within a few hundred meters of each other on Albany Road including several high-profile national and regional brands including Martins & Co and Peter Alan.

Highlighting the difficulties commercial landlords face from squatters, the activists involved in this case have warned the only way to remove them is via a ‘claim for possession in the country court or high court’ both of which are difficult at the moment as the Covid evictions backlog is cleared.

WalesOnline reports that a new leaseholder has been lined up for the property at £13,000 and that the sale of the freeholder will now have to wait until the squatters, who are using the premises to host anarchist courses of squatting, are removed.