Foxtons plans to almost double its presence in and around London within five years as it continues to take advantage of high property prices in the Capital. 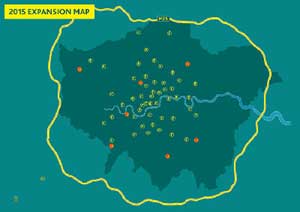 The multi-award-winning estate agency has announced that it wants to open as many as 42 new branches across London and the South East by 2020, as part of its strategy to increase its market share within the M25 area.

Foxtons, which currently has 58 branches across the South East of England, says that it will be increasing their coverage within the M25 to 100 offices. Openings so far this year have included; Barnes, Walthamstow, West Hampstead, Ruislip and Bromley, while last week the company opened two more branches in Surbiton and Croydon.
To mark the launches, Foxtons has been offering its familiar 0% commission offer for a limited time period, in a bid to boost local market share.

Andrew Weir, Managing Director at Foxtons, said, “Our expansion strategy currently focuses on the outer London areas which are continuing to show considerable growth, and we look forward to bringing our 34 years of knowledge and expertise in the property market to these local communities.”

News that Foxtons will be increasing its presence will undoubtedly be met with fear and anger from rival agents in some of those areas it targets.

Earlier this year, estate agents in West Hampstead, North West London, led objections against an application by Foxtons to open an office in the in the local area.

Some residents, concerned that their arrival would artificially inflate property prices, also protested, but to no avail – the West Hampstead branch was opened in April.