Fracas breaks out at agency challenged by London Renters Union

A meeting between LRU members and staff at Eaton Green estate agents ends in a violent confrontation – and all caught on Twitter. 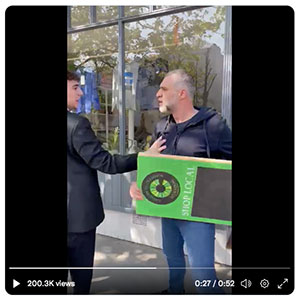 Eaton Green estate agents in Camberwell, south east London turned into the scene of an aggressive confrontation between London Renters Union activists and a person who appears to be a member of staff at the agency.

The incident was filmed and posted on Twitter and has amassed an enormous 200,000 views since Thursday morning.

Several members of the LRU went to the office of Eaton Green to demand a stop to an alleged campaign of harassment. The meeting seemed to have taken place peacefully but became violent as the group left the office and one of them is heard in the video to insult one of the staff, saying, “Well done w*****”. The fracas then ensues outside the office, where a person pics up a sign board after pushing and shoving the demonstrator.

The incident has drawn Propertymark ARLA into the furore who posted a tweet on the Twitter thread, saying, “We are investigating the footage that’s appeared today and any case would follow our regulatory processes. Our standards would never tolerate unprofessional or violent behaviour.”

The Twitter thread and video can be seen here.

The video does contain violent scenes and bad language.