Most popular agent identified by face-to-face interviews with over 20,000 applicants by The Times. 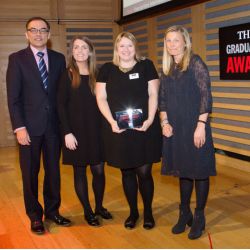 Savills has been named Graduate Employer of Choice in a survey of over 20,000 applicants by The Times newspaper. Competitors JLL were placed second and Knight Frank third.

The awards were held last week in London and presented by Martin Birchall from specialist market research company High Fliers.

This is the 11th time that Savills has won the accolade from the newspaper, which also recently placed the company 94th in the UK within its other graduate rankings scheme, Top 100 Graduate Employers.

This was the first time the company has been included in the list, which is topped by accounting giant PwC, and makes it the only agent to get into the rankings this year.

Savills is coy about how much it pays its annual 170-strong graduate intake, but website Glassdoor.co.uk reckons Savills pays starter associates £36,275.

Mark Ridley, CEO of Savills UK and Europe (pictured), says: “To have secured this award for the eleventh consecutive year is a tremendous achievement and one of which we are incredibly proud.

“Furthermore, this prestigious recognition underlines the importance we place on offering a first class programme that provides our graduates with a strong and diverse foundation from which they can develop and progress throughout the global business.”

Ema Saunders, Director of People Development at Savills, adds: “We are continually evolving our graduate programme to ensure it is relevant, current and attractive to a diverse base of graduates.”