Hamptons International has snapped up John Curtis in Hertfordshire, while Foxtons is set to open five more new offices in London.

Hamptons International has this week announced that it has acquired John Curtis, a sales and lettings agency based in Hertfordshire.

John Curtis, a well established agency with offices located in Harpenden and Wheathampstead, offers a full range of sales and lettings services.

Commenting on the acquisition, he said: “We are delighted to start 2015 with such a strong acquisition. John Curtis is the leading sales and lettings agency in Harpenden and the surrounding area and will help to significantly strengthen our footprint in the Hertfordshire region, while bolstering our profile north of London. Today’s acquisition signifies a key part of the company’s strategic plan to expand its UK network, which includes 85 branches across London and the South of the UK.”

Ken Whittaker (right), Director at John Curtis, which has been established in the community for over 40 years, also expressed his delight at the fact that his firm has now been integrated into the Hamptons International network.

He commented: “We look forward to strengthening our position by being part of a well-known brand such as Hamptons International, which will also offer our staff and clients a range of opportunities and benefits. The combination of our local knowledge and reputation matched with Hamptons International’s extensive market reach heralds an exciting chapter for the entire team.” 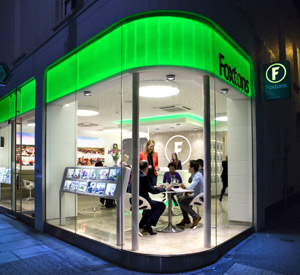 Meanwhile, Foxtons, one of London’s leading estate agents, has revealed its latest expansion plans by adding five new offices to its current network.

Bringing the total number of strategically placed offices throughout London and Greater London to 56, the company is looking to accommodate the ever-increasing demand for property in the areas.

The new Barnes, Walthamstow, West Hampstead, Ruislip and Bromley offices, opening between March and April this year, will adopt the Foxtons zero per cent commission promotion, offering to sell the area homeowners’ properties for free for a limited time, in a bid to instantly win greater local market share.

NicBudden, Chief Executive Officer, commented: “We are very excited to take the next step in our expansion strategy with the launch of these new offices. With years of experience operating in these areas from our neighbouring offices, we now look forward to offering our unparalleled expertise and knowledge to the local communities.”