£1m homes are no longer just for the super-wealthy. 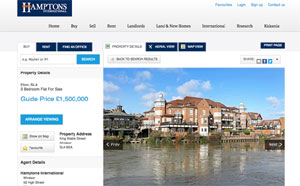 Almost half of buyers who paid £1m or more for their home in 2015 took out a mortgage, the highest level in a decade.

46 per cent of buyers of £1m+ homes used a mortgage in 2015, double the 23 per cent at the start of the financial crisis in 2008, according to new research from Hamptons International.

Typically a greater proportion of a more expensive property is bought without the need for a loan, but the increasing use of mortgages reflects the view that £1m homes are no longer only for the super wealthy – particularly in London.

The rise in the use of mortgages to buy more expensive homes since the financial crash also reflects the low cost and increasing availability of finance as the economy has recovered and credit conditions have loosened. With even well-off buyers struggling to get a mortgage during the 2008 downturn, just 23 per cent of purchases of homes for £1m or more involved a loan. In all but one year since the crisis, that proportion has risen.

46 per cent of people who bought a home for £1m or more used a mortgage in 2015, up from a trough of 23 per cent in 2008 – the start of the financial crisis. But the proportion differs across the country. (see table 2)

58 per cent of homes bought for £1m or more in the capital last year were purchased with a mortgage – the highest proportion in 10 years. This compares with a low point of 31 per cent in London in 2009 as the credit crunch took hold.

Yet in the North West just 23 per cent of £1m properties were bought with a mortgage in 2015 – the lowest in the country. This reflects the fact that such highly priced homes sit well beyond the top of the typical family housing ladder outside of the South of England. (see table 2)

At the more expensive end of the market, mortgages are used less often. In 2015, 55 per cent of homes in the £1-2m bracket were bought using a mortgage. This compares to 30 per cent for the £2-5m bracket and just 9 per cent for homes worth over £5m. 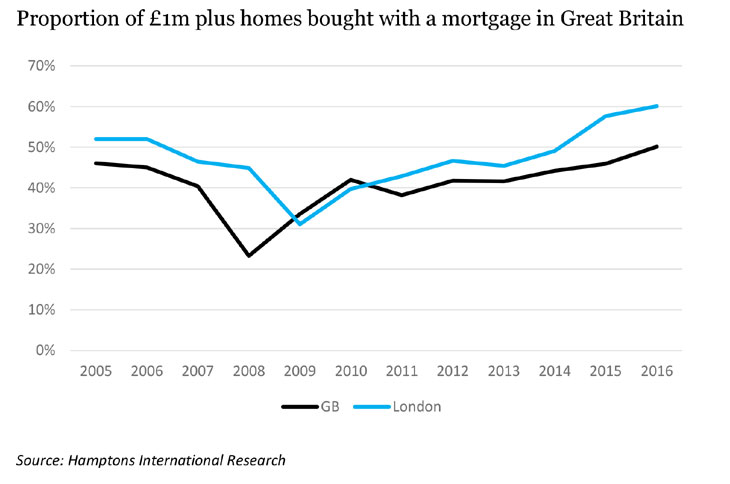