Sign in or Sign up
The essential site for residential agents
Home » News » Housing Market » Here’s how to get out of the housing crisis, Boris!
previous next
Housing Market

Nick Milton, a biographer of much-maligned Prime Minister Neville Chamberlain, says our current PM could learn a lot from his time in office. 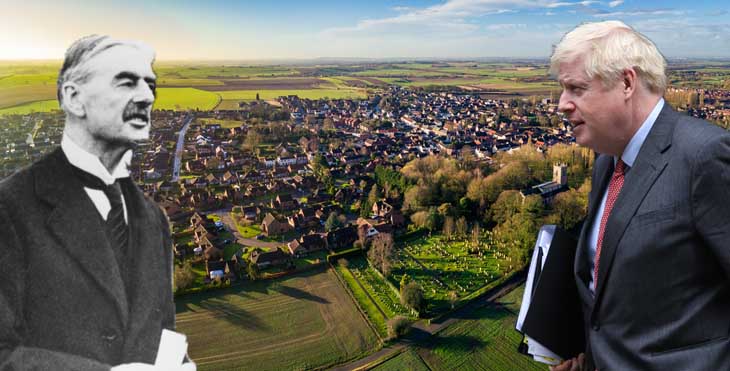 This year marks the 80th anniversary of the death of one of Britain’s most misunderstood Prime Ministers, Neville Chamberlain. Remembered almost solely for his controversial policy of appeasement and waving his ‘piece of paper’ proclaiming ‘peace for our time’ after visiting Hitler in September 1938, there is much more to Chamberlain than is commonly known – particularly when it comes to housing.

Nearly 50 years old before he was elected a MP in the 1918 general election, he came into politics to improve the dire living conditions of his constituents in his native city of Birmingham. There many of them lived in extended families in rented accommodation, often more than two to a room, in slum housing.

In 1924 he was appointed Minister of Health, a portfolio which then included housing and one of his first acts was to continue with the Wheatley Housing Act of 1924 which had been passed by the previous short lived Labour government. This resulted in over half a million council homes being built in Britain by the 1930s, one of the biggest house building programmes of modern times.

Later as Chancellor he passed the Housing Act of 1935 which made it a legal requirement for local authorities to identify unfit homes and build replacements before in 1937 becoming Prime Minister.  Chamberlain had big plans for housing when he came to office, but his time was soon dominated by foreign policy and the rest as they say is history

What can Boris Johnson learn from Neville Chamberlain? Like Johnson, Chamberlain found himself at the mercy of global events not of his own making which led to an economic depression. His way out of it was to invest in building affordable semi-detached homes, many of which still put a roof over the head of hundreds of thousands of people, particularly around London and southern England.

This decade has seen the lowest levels of peacetime construction since the 1920s when Chamberlain came in and over a million people on waiting lists. As Johnson seeks to find ways to kick start the economy following the Covid-19 pandemic, he should take a leaf out of Chamberlain’s book and embark on a new house building programme.

That means empowering local authorities to issue bonds so they can raise funds to invest in new homes, particularly for first time buyers and those on low incomes. Thats exactly what Chamberlain did and it worked helping to restore the country’s finances following the Great Depression. By being bold on housing Johnson would not only boost the economy but also make a reality of the Conservative slogan ‘We’re going to #BuildBackBetter.’

Nick Milton (left) is the author of ‘Neville Chamberlain’s Legacy’ published by Pen and Sword. Negotiator readers can get a signed copy for £20 (RRP £25) plus P&P by contacting Nicolas at www.nick-milton.com

Senior agent reveals ‘tough challenge’ of getting into RICS