Two brave figures in the residential sales industry predict that the traditional high street estate agency could disappear in the next five to ten years. 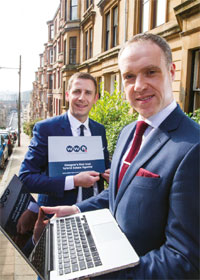 Barry Walker and Stuart Wylie, former directors of Glasgow-based Clyde Property, believe that the traditional property marketing model of charging a percentage of the sales cost is becoming unsustainable as established agencies struggle to justify their selling fees.

Barry and Stuart, members of the NAEA and The Property Ombudsman, have launched Walker Wylie, a hybrid online agency that offers the same service as traditional branches but at a fraction of the cost.

They are using Rightmove and Zoopla to launch their assault on the country’s £4billion estate agency industry. With its 19.7k customer base, Rightmove now controls 75.1% of the UK market, driving a coach and horses through the traditional property sales business model.

Traditional agency is now in its death throes but no-one is willing to admit it while there is still money to be made.

Walker and Wylie predict that within the next decade, paying a visit to your local estate agent to view its catalogue of homes will be as outdated as using a telephone book.

“Around 97 per cent of all sales now start with the buyer spotting a property online and contacting the estate agent,” says Stuart.

“The days of the estate agent calling the buyer to tell them a property has gone on the market are over. Most of the work previously done by estate agents is now done remotely by buyers registering on Rightmove and Zoopla for new property alerts while estate agents continue to charge the same, exorbitant prices and home sellers are starting to recognise this.

He added, “All of this is an unspoken truth within the trade but no-one’s prepared to admit it openly. Rome is burning while estate agency branches continue to fiddle to the same, outdated tune.”

In the first of a series of monthly reports on the UK property market, Credit Suisse said that online agents were out-performing the high street in growing the number of sales.

The nationwide average fee paid to traditional agents is around £4,000 + VAT. At the height of the property boom some agents would charge as little as 0.75 per cent but a sluggish market in some areas saw that creep up to between 1 and 1.5 per cent. This means selling a £200,000 property could cost up to £3,000 + VAT.

Online portals have brought a flood of low fee online agents, Walker Wylie’s offering is a hybrid of online portal and local estate agents, offering a flat fee of £595 for selling property, paid upon completion, plus a fixed marketing fee of £150.

Its biggest challenge has been convincing customers that it can be trusted with more expensive properties but it reports a string of high-value sales in its first six months, including ten sales in excess of £300,000 and one which exceeded £400,000, creating a new record price for that street.

“The biggest hurdle we faced was convincing sellers there was no catch to what we were offering,” says Barry. “Because the high street estate agencies continue to charge thousands of pounds for selling even a modestly priced property, some sellers mistakenly believe they’re doing something special that we’re not.

“The truth is that they’re overcharging their customers. When people see that we’ve come from an agency background and that we know the market and the industry inside out, they are increasingly switching to us.”

The pair launched the business last year, investing savings because they saw the writing on the wall for the industry.

Barry said, “I’d been invited to pitch for the sale of a two bedroom flat in Broomhill and the fee I quoted was £3000 + VAT. The owner had just been quoted £600 by an online agency. He said that the same people would see his advert on Rightmove whatever agency he went with so, for him, it was a no brainer.

“It was then that I realised the game was up for the traditional high street agency and that, if I wanted to survive in this industry, I was going to have to adapt to a new way of doing things.”

Stuart added, “The estate agent’s database of potential buyers used to be its most powerful tool but online portals have made it redundant.

“High street agencies will tell you they can get a better price; that they know the market better; that they will do all sorts of things to market your property.

“Increasingly they are promising black magic in an attempt to convince them that they are still relevant and to justify their outrageous prices.

“The traditional agency business is in its death throes but no-one is willing to admit it while they believe there’s still money to be made. Consumers are being ripped off. There’s no justification for the fees they charge based on what they do. It’s indefensible.”

What’s your view?
Respond to Walker Wylie’s thoughts by writing to us: [email protected]