It might have been a wash-out for weather, but this summer was the best ever for property, says Kate Faulkner of Designs on Property – but inevitably autumn’s coming.

“Busiest ever first half of a year pushes average price of property coming to market to a new record high for fourth consecutive month, and £21,389 higher (+6.7%) in just six months.”

Busiest ever first half of a year pushes average price of property coming to market to a new record high for 4th consecutive month.

“Nationally, +83% of respondents cited an increase in house prices over the survey period (compared to +82% in May). Comments submitted to the survey frequently highlight that this prices growth is being underpinned by the sheer lack of supply on the market at present. All parts of the UK continue to exhibit strong rates of house price inflation, led by exceptionally robust upward pressure in Yorkshire & the Humber, Northern Ireland and Wales.”

In month-on-month terms, house prices fell by 0.5%, after taking account of seasonal effects, following a 0.7% rise in June.”

“House prices rose by 0.4% in July to add £1,122 to the cost of the average property, pulling back some of the ground lost during June (-0.6%, -£1,543). Annual price growth fell to +7.6%, its lowest level since March. This easing was somewhat expected given the strength of price inflation seen last summer, as the market began its recovery from the first lockdown, and with activity supported by the start of the stamp duty holiday.”

“Overall, we saw a continued positive movement in house prices with the average price of completed sales growing by 9.1% in July to £336,003. Continuing government support for the housing market and low interest rates continue to help with buyer affordability and offset the initial stage withdrawal of the stamp duty holiday and the complete withdrawal of the Land Transaction tax in Wales. If we exclude the smaller rates of growth in Greater London and the South East, the annual rate of growth remains over a remarkable 12%.”

Search for space drives house price growth to 7.3%, above flats at 1.4% “Average house prices rose by 1.3% in Q2, taking the annual rate of growth to 5.4%, up from 2.2% registered in June last year. Prices are being pushed upwards by particularly strong growth in Wales and the North West of England, which, at 8.4% and 7.3% respectively, are the highest rates of house price growth in these regions for 16 years. There is also strong price growth in Northern Ireland (8.6%).”

The indices this month are still incredibly positive, despite the end of the Stamp Duty/Land Tax holiday. All are reporting the market is slowing versus the run up to the end of June, but versus previous years, demand is still incredibly strong, while the amount of stock coming onto the market is weak in most areas. In Scotland, Faisal Choudhry from Savills explains the end of the Land and Buildings Transaction Tax has made “no discernible impact on Scotland’s housing market.” According to Faisal “demand remains strong, with the number of Scottish Agreed Sales between April and July 12% higher compared to the market pre-pandemic between April and June 2019.”

All the indices are reporting how strong transactions are due to massive demand and a shortage of supply.

Perhaps the most exciting thing from a property price/home moving index perspective is the launch of two new fascinating indices. One from the portal OntheMarket and the other from reallymoving. com which compares costs for solicitors, surveyors and removals for home movers. Both of which give us a better understanding of the overall housing market with their different analysis.

House price averages range from £244,229 (Nationwide mortgage prices) to £338,447 (Rightmove asking prices), a variation of 38.5% between actual prices paid and the price of properties marketed. 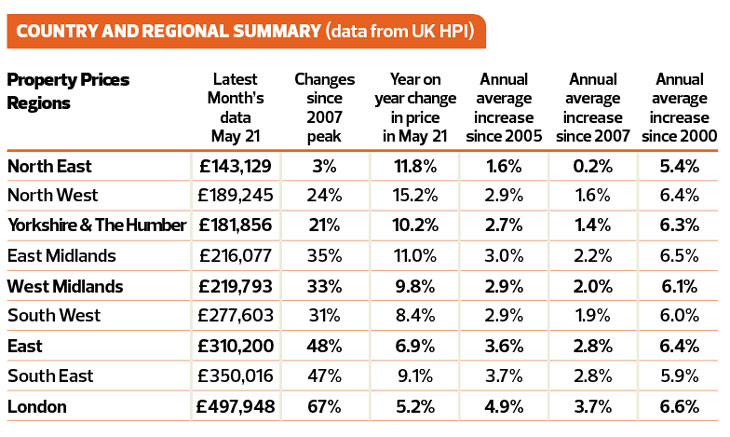 Growth rates in the regions differ substantially with London growing by 5.2% year on year, while the North West, on average, has seen triple this growth at 15.2%. The North East, Yorkshire and Humber and the East Midlands have grown at double this rate. However, unlike the different country inflation rates, the North East and Yorkshire and Humber property price rises, going back to 2005, show property prices are not rising in excess of inflation, while the North West, over time, is on a par ie those that own outright/ invest with cash haven’t seen a real increase. The East Midlands though has just edged ahead. Meanwhile, although London is ‘bottom’ of the annual price rise charts, it still tops the table for long term growth at 4.9%.

However, it’s important to know that these average house prices don’t apply to every property in each region. Reallymoving has created a new index which is more in depth and shows the average price for each individual home mover in each region.

In this month’s report we’ve included the different prices FTBs pay across the UK versus the ‘UK’ average of £250,000 in Q2 2021. As you can see, in areas such as Scotland, Wales, West Midlands, Yorkshire, East Midlands, North East, North West and Northern Ireland, first time buyers can pay a lot less than the average, with the North East being the cheapest place to buy where FTBs pay just £137,000.

If you want to access regional and city data for upsizers, downsizers and investors, visit: reallymoving.com.

Normally, once a Stamp Duty Land Tax holiday ends, sales plummet and often prices tend to ‘fall back’. However, all the indices currently are reporting how strong transactions are due to massive demand and a shortage of supply.

In addition, when a stamp duty/land tax change is due, the media usually run some big headlines about buyers that have lost out – especially when the last one came into force in 2016 when SDLT in England went up to 3%. However, the good news this time around is that these headlines haven’t come forward. Partly due to the extension from March 21, but also due to the huge effort on behalf of the industry to alert people to the fact that their purchase might not go through on-time.

Moving forward all expectations are that the market will ‘slow down’ but no-one is predicting the normal cliff edge and demand is expected to stay higher than supply, supporting prices to the end of the year.

“Prices are still being supported by strong levels of demand in the market. While buyer demand has eased since the peak in April, when levels were unsustainably high, they are still running 80% higher at this time of year compared to more ‘normal’ market conditions between 2017 and 2019.

“At the same time, the supply of homes is not keeping pace. The flow of new supply has started to return to more usual levels for this time of year, but it is not enough to replenish stock levels, which are running 25% below average 2020 levels.

“Even so, the number of sales agreed are still running 22% ahead of 2020 average levels, and will remain higher than previous years as homeowners continue to take advantage of the extended stamp duty holiday – with savings of up to £2,500 on offer until the end of September.

“We forecast there will be around 1.5 million completed transactions this year, up from 1 million last year, and the highest level since 2007.”

“Rightmove expects that the number of sales completed in the first six months of the year and due to be reported by HMRC later this week is on course to be around 800,000, which could just beat the previous record of 795,000 set in 2007. The 2007 record was set under very different circumstances, at a time when mortgage lending criteria were much less stringent than in today’s more controlled market. Our analysis shows that the shortfall of 225,000 homes for sale comes from 140,000 more sales being agreed and 85,000 fewer new listings than the long-term (2014-2019) average for the first half of a year. The net result of this major imbalance between supply and demand is that the average number of available properties for sale per estate agency branch is at a new record low of 16 properties, compared with the previous low before 2021 of 25 properties and a longer-term average for this time of year of 31%.” 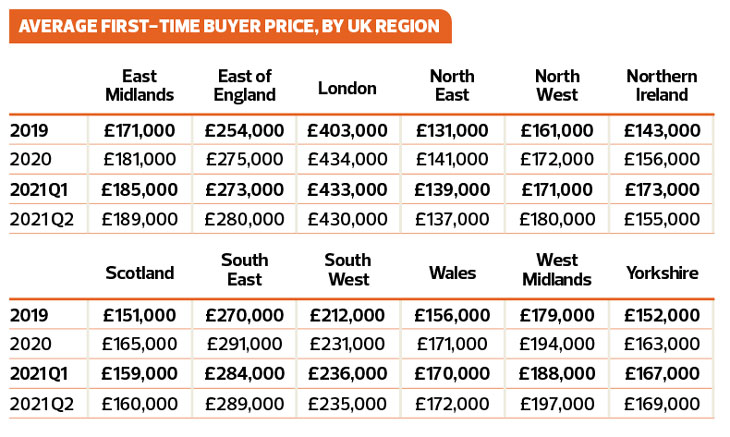 “At the headline level, +14% of contributors reported an increase in new buyer enquiries during June. Although this is the fourth successive positive monthly reading, it does represent a noticeable moderation compared to the recent high of +43% posted back in April. What’s more, this easing in momentum is visible across virtually all regions/countries of the UK covered by the survey. Nevertheless, the latest feedback continues to signal a clear excess of demand over supply. Indeed, new instructions came in at -34% (down from -24% previously) during June, consistent not only with a third consecutive monthly fall in new listings but also pointing to an accelerated rate of decline. While +17% of survey participants still note that the number of market appraisals being undertaken is running ahead of the comparable period last year, this gauge has turned slightly softer in each of the past two months (was +34% in April, +24% in May).

The number of sales agreed are still running 22% ahead of 2020 average levels, and will remain higher than previous years.

“Meanwhile, the number of agreed sales picked up once again in June, evidenced by +8% of respondents noting an increase. Again, although still positive, the net balance for this metric has eased over recent months, having hit +46% back in March.”

“Recent months have been characterised by historically high volumes of buyer activity, with June the busiest month for mortgage completions since 2008. This has been fuelled both by the ‘race for space’ and the time-limited stamp duty break. With the latter now entering its final stages (the zero percent rate only applies to the first £250,000 of the purchase price, before reverting back to standard rates from October), buyer activity should continue to ease over the coming months, and a steadier period for the market may lie ahead.

“Latest industry figures show instructions for sale are falling and estate agents are experiencing a drop in their available stock. This general lack of supply should help to support prices in the near-term, as will the exceptionally low cost of borrowing and continued strong customer demand.”