Annual house price growth recovers to 1.5% in July, according to latest Nationwide house price index, with prices up 1.7% on June.

Annual house price growth recovered to 1.5% in July, according to the latest figures from Nationwide.

Prices were up 1.7% month-on-month, after taking account of seasonal factors, reversing June’s fall of 1.6%.

On a seasonally adjusted basis, house prices in July were 1.6% lower than in April.

The nation’s largest building society says it believes the stamp duty holiday is likely to provide further support in the near term.

Commenting on the figures, Robert Gardner, Nationwide’s Chief Economist, said: “The bounceback in prices reflects the unexpectedly rapid recovery in housing market activity since the easing of lockdown restrictions.

“The rebound in activity reflects a number of factors. Pent-up demand is coming through, where decisions taken to move before lockdown are progressing.

“Moreover, social distancing does not appear to be having as much of a chilling effect as we might have feared, at least at this stage.”

Mr Gardener said the trends looked set to continue in the near term, further boosted by the stamp duty holiday.

But he added: “There is a risk this proves to be something of a false dawn. Most forecasters expect labour market conditions to weaken significantly in the quarters ahead as a result of the aftereffects of the pandemic and as government support schemes wind down. If this comes to pass, it would likely dampen housing activity once again in the quarters ahead.”

Industry guru Anthony Codling of property portal twindig was cautious about the results.

“The day after Lloyds Bank, the UK’s largest lender cut its house price forecasts and raises them for unemployment, Nationwide reports that house prices rose in July by 1.7%,” he said.

“It’s too early to tell if the stamp duty holiday may be pushing up prices, but it may well be a factor and should the UK experience a second wave of COVID this ‘bounce’ may be short-lived.”

Sam Hunter, chief operating officer of Homesearch, said the Nationwide figures mirrored what the firm has been hearing from its network of agents across the country over the past few weeks – that the bounceback is in full swing, with many buyers and sellers motivated to move as a consequence of lockdown and spurred on by the stamp duty holiday.

However, he added: “My concern though, is that with mortgage affordability becoming ever-more stretched, and the potential of a downturn in the autumn, this summer rebound could be short-lived in terms of price growth.

“As a result, we’re recommending our agents to provide pragmatic counsel to their vendors around taking the opportunity of a busy market to price realistically and achieve a fast sale, rather than aiming to break the ceiling price of the road and have properties sitting on the books for months.

“We anticipate more stock coming to the market over August and September, as discretionary sellers are tempted to try their luck given the current levels of demand.”

‘Nothing short of miraculous’

Managing director of Barrows and Forrester, James Forrester, said the rate at which the property market had rebounded over the past few months had been “nothing short of miraculous”.

“While the current pandemic continues to dampen many aspects of life, homeownership isn’t one of them, and we should continue to see some very positive price trends play out over the year,” he said.

“Those that were so quick to talk the market down seem to have now entered into an unseasonal hibernation. While they will no doubt emerge from their boltholes of negativity to forecast yet further armageddon in the even of a second-wave, it’s quite clear that the market isn’t prepared to lay down and die as they might have hoped.”

Director of Benham and Reeves, Marc von Grundherr, commented: “The property market party is in full swing at the moment, and we’re yet to see the benefit of the recently announced stamp duty holiday filter through. Once that does, expect further increases in house price growth due to a notable and sustained increase in buyer demand.

“London, in particular, has now turned a corner and will see the vast majority of buyers benefit from a stamp duty reprieve. This will help accelerate the capital return to form and see the region regain its seat at the helm of the UK property market, helping to drive house price growth in the right direction.

“As a result, we should finish the year in a much, much better position than anyone could have imagined just a few short months ago.”

Nationwide also looked at the effects of the stamp duty holiday in terms of the savings buyers will make. 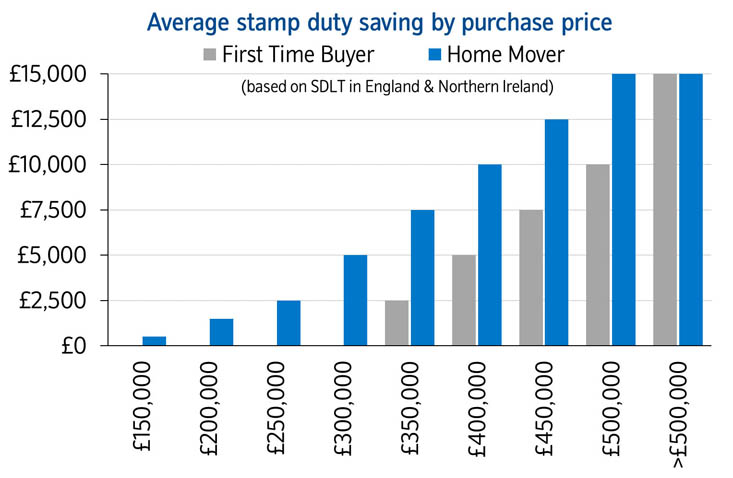 The report says the temporary increase in the tax threshold in England and Northern Ireland to £500,000 should mean that around 90% of owner-occupier transactions in England will pay no stamp duty over the next nine months.

The Scottish government raised the threshold for its equivalent Land & Buildings Transaction Tax (LBTT) to £250,000, which means that 80% of home purchasers in Scotland will pay no LBTT.

First-time buyers were already exempt from SDLT on purchases up to £300,000, so the changes have a greater benefit to home movers.

There is also a significant skew in the beneficiaries towards wealthier households which are disproportionately in London and the South of England, where average house prices are significantly higher (see chart below). 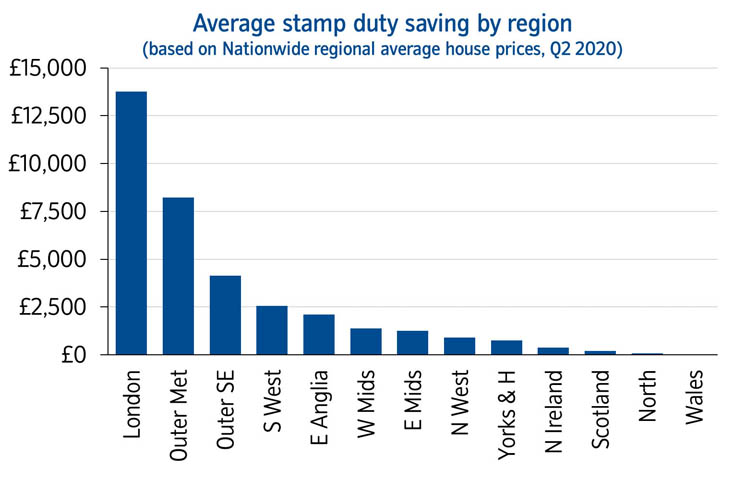