House price rises carry on regardless

Just when you thought house prices couldn't get any higher, a new survey of conveyancing data suggests we still have a way to go. 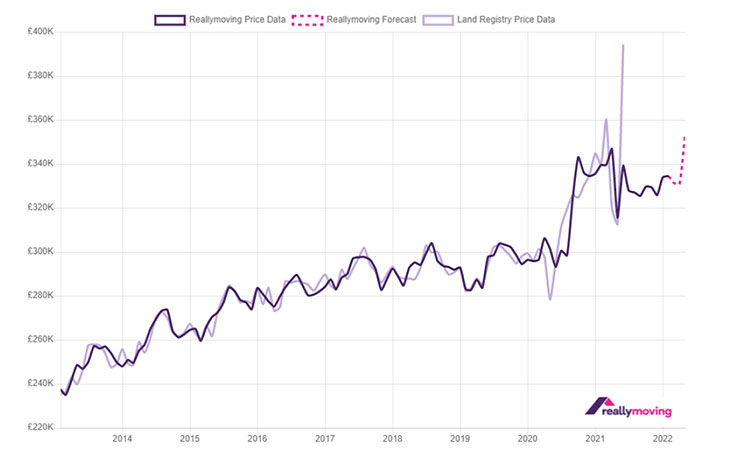 Just when you thought house prices couldn’t get any higher, a new survey of conveyancing data suggests we still have a way to go. This despite rocketing costs, rising interest rates and uncertainty around the war in Ukraine.

• The average property price is set to rise sharply this spring to new all-time record of £352,984
• A fall of 0.9% in March and 0.2% in April will be wiped out by a 6.7% surge in May
• Stock shortage and fierce buyer competition is forcing prices upwards despite inflationary pressures
• Annually, price growth will hit 11.9% in May, albeit against a notably low average price in May 2021

The shortage of homes for sale and continued strong demand from buyers will drive house prices up by 5.5% over the next three months (March to May 2022) to a new all-time high of £352,984, according to the Reallymoving House Price Forecast February 2022, released yesterday.

Despite signs of a slowdown at the start of the year which will result in a fall in registered sale prices in March and April, the strength of demand continues to propel the market upwards with the rising cost of living as yet having little impact on buying decisions.

Reallymoving captures the purchase price buyers have agreed to pay when they search for conveyancing quotes through the comparison site, typically 12 weeks before they complete. This enables Reallymoving to provide a three-month house price forecast that historically has closely tracked the Land Registry’s Price Paid data, published retrospectively.

Based on deals agreed between buyers and sellers over the last three months, prices will fall by 0.9% in March and 0.2% in April before surging upwards by 6.7% in May – a direct result of buyer competition for a limited supply of homes during February.

News in early February of a second base rate rise in three months, taking interest rates to 0.5%, has had little effect on demand, with many movers keen to do a deal as quickly as possible and lock in a fixed rate deal at the lowest price.

We’re seeing a clash of post-pandemic driven buyer demand and a cost-of-living crisis which is only now really beginning to bite.”

Conflict in Ukraine and the impact of sanctions on Russia, particularly on the cost of energy and fuel, is likely to have an impact on affordability and consumer confidence going forward, but so far this has been masked by the stock shortage forcing buyers to compete for homes.

Rob Houghton, CEO of Reallymoving, commented, “Last month we saw some early signs that the market may be beginning to slow but the latest data shows prices rising sharply in May based on activity in February, suggesting that for now the housing market will continue to defy expectations.

“We’re seeing a clash of post-pandemic driven buyer demand and a cost-of-living crisis which is only now really beginning to bite, and as yet it remains a seller’s market and the supply/demand imbalance is continuing to push up prices. It’s too early to assess the impact on consumer sentiment from the war in Ukraine and if uncertainty grows and prices rises become more painful, I expect we’ll see the tables begin to turn.”