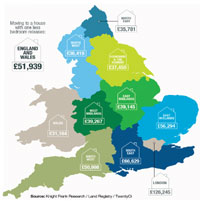 According to Knight Frank’s Retirement Housing report, by 2039, one in 12 people will be aged 80 or over. Therefore, the need for a dramatic increase in new housing for the ageing population across the UK is now recognised as a key social and political issue.

Key Findings: 23 per cent of the population is currently aged over 60. During the next 20 years this will rise to 29 per cent, pushing the median age across the UK from 40 to nearly 43.

Whilst official data shows that for all households between 2012 and 2037, more than three quarters will be headed by someone aged 65 or over, just 3 per cent of new-build units in the pipeline are designated ‘elderly’ or ‘sheltered’ housing.

Knight Frank research shows that around 25 per cent of over-55s said they wanted to move into some sort of retirement housing in the future. This equates to around 2.5 million households.

Gráinne Gilmore, Head of UK Residential Research at Knight Frank, said, “Increasing housing supply is widely recognised as a priority by policymakers, but now there needs to be equal emphasis on delivering a range of housing to suit all demand, across all age groups. Providing the right type of housing for all buyers benefits everyone in the market; freeing up the housing chains and thus helping all purchasers, from first-time buyers climbing on the property ladder to those downsizing to a pied-a-terre in town.

“Supply of retirement housing is currently very limited, and there considerable is room for this sector to grow across the UK.”