The Capital is in a property bubble that could pop at any time, warns UBS. 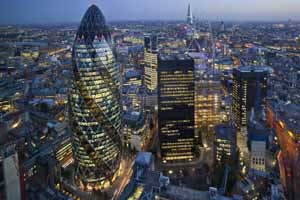 London has been named as the world’s riskiest for a housing bubble after fresh data revealed that the average price of a home in the capital had hit £500,000 in September, up 10 per cent year-on-year.

The Swiss bank waned that the UBS Global Real Estate Bubble Index points to the risk of a “substantial price correction” in London’s property market should the fundamentals for residential property investment in the city deteriorate.

The average price of a residential property in London reached £499,997 in September, according to the Land Registry, up 10 per cent on a year earlier.

UBS said that London’s housing market is now the world’s least affordable, bar Hong Kong, which UBS ranks as the second-most likely city to have a property bubble.

“Domestic buyers too have contributed to the appreciation,” the bank added.

Home prices in London are being primarily pushed higher by a chronic shortage of properties, and with housebuilders failing to deliver anywhere near the volume of properties required to plug the supply-demand imbalance that trend looks set to continue, according to Peter Rollings (left), CEO of Marsh & Parsons.

He commented, “Most of this heat is emanating from a shortage of homes for sale, especially at the more affordable end of the London property market.”

But with interest rates set to rise next year and with sales activity at the higher end of the property market in the capital slowing, talk of a housing bubble in the capital may be wide of the mark.

“Sales activity is looking decidedly cooler and the million poundplus market is yet to thaw out and get moving again since suffering the repercussions of more stringent stamp duty,” Rollings added.

Across England and Wales property prices rose at a more moderate rate compared to London, up 5.3 per cent in the year to September to reach an average of selling price of £187,000.

The only area not to see an increase was the North East of England, where prices dropped by 0.3 per cent to just under £100,000.

Reflecting on the latest land Registry data, Brian Murphy (right), Head of Lending at Mortgage Advice Bureau (MAB), commented, “Generally, higher house prices are good news for existing homeowners, and not only when they come to sell. Improved housing equity means borrowers are more likely to be able to access the most competitive remortgage deals on the market. However, these benefits aren’t being felt equally across the whole country:  the North East saw a monthly and annual fall in house prices.”

Improved mortgage affordability is helping to counter concerns about increasing home prices, but many mortgage borrowers are aware that today’s record-low rates will not last forever, as MAB research shows.

Murphy added, “Our research shows 96 per cent of homebuyers opted for fixed rates in September in a bid to protect themselves from rising interest rates.”