There has been a sharp increase in the number of new homes being built in England over the past 12 months. 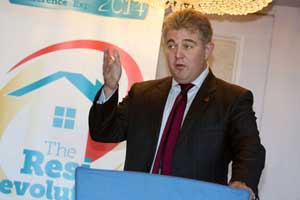 House building in England is now at its highest level since 2008 following a significant rise in the volume of new homes being developed, new Government figures show.

In the year to June, 131,060 residential properties were completed, a rise of 15 per cent on the same period a year ago.
The latest quarterly house building statistics from the Department for Communities and Local Government (DCLG) show that between April and June, the number of completions rose by 22 per cent year-on-year.

The Housing Minister, Brandon Lewis (right), welcomed the figures, but admitted there was more to do, vowing that the Government would “deliver 275,000 affordable homes by the end of this Parliament”.

However, the number of new homes being started dropped by 1 per cent over the year, to 136,320, and by 6 per cent on a quarterly basis.

The data was described as “encouraging” by Henry Gregg (left), the National Housing Federation’s(NHF) Assistant Director of Campaigns. But he also said that it was crucial that we as a nation continue to increase our efforts “to build the homes that are desperately needed”.

He commented, “Last year alone we built less than half of the homes needed, pushing house prices and home ownership further out of reach for millions of families and young people.

“Housing associations are building across the country and are valuable potential partners for Government to get even more homes built. We want to work together to end the housing crisis and provide quality affordable homes to everyone who needs them.”

Communities Secretary Greg Clark has announced the launch of a £26million fund which will help architects, developers, councils, and housing associations to acquire brownfield land on which to build Starter Homes. Clark also made available £10million to help local authorities prepare brownfield sites for development.

The British Property Federation (BPF) hailed the launch of the funds as a welcome step towards unlocking brownfield land, which often demands a complicated and lengthy planning process, and which is expensive to develop.

It warned, however, that more funding will need to be provided if the Starter Homes initiative is to deliver the 200,000 homes that the Government has promised.

Melanie Leech (right), Chief Executive of the BPF, said, “Brownfield sites often prove to be extremely lengthy and complex to develop, and if the government wants to see significant amount of housing delivered on them, then developers and housebuilders are going to need some help.

“The funds launched today show welcome recognition of this fact, but we will need to see more from government if it is to reach its Starter Homes targets.”