Last week’s ARLA 2015 Conference provided a platform for hot debate on the outlook for the lettings industry. 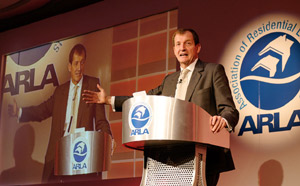 Housing industry lobbyists have not done enough to make housing a primary issue of the General Election, according to Tony Blair’s former Director of Communications and Strategy, Alastair Campbell (right).

Despite the growing housing crisis, the main political parties are far more focused on other issues like the NHS, economy, immigration, welfare and jobs, with housing lower on the political agenda, largely because housing lobbyist have so far not done enough to be heard.

Speaking at the Association of Residential Letting Agents (ARLA) conference last week, Campbell advised the industry to campaign harder on housing issues in order to make it a greater political issue.

“Too many people give up before they have actually been heard,” said Campbell.

He pointed to homeless charity, Shelter, as an organisation that commanded prominent media coverage thanks to their knack of campaigning on a particular issue.

He continued, “I think at this stage of the election campaign, housing is not in there as strong as it should be, as a strategy. You have all the politicians talking about a housing crisis, but in terms of what they are going to do about that, who is shaping that agenda for them? 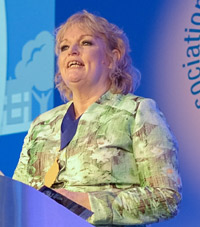 Valerie Bannister (left), President of ARLA, commented, “With the General Election only a few weeks away, the conference provided an essential platform for industry figures to engage in a thoughtful and constructive debate about the future of the private rented sector. We were delighted with the calibre of audience, speakers and guests which resulted in another highly successful conference.”

The helpline, which is provided by Dutton Gregory Solicitors, will be run by eleven legally trained staff, to help ARLA members with all landlord and tenant enquiries, as well as immigration and general business law.

Bannister added, “We are thrilled to be able to provide this extra benefit to members. Legal advice can be a costly burden to many letting agents, even when the query may be resolved with a small piece of advice. We hope this provides extra peace of mind for all our members that help is on hand when they need it.”