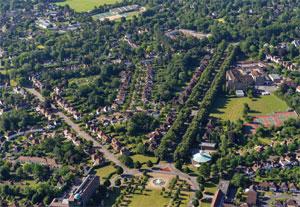 Garden cities aren’t a new idea, Sir Ebenezer Howard dreamt up the idea back in 1898, creating his first baby, Letchworth Garden City in Hertfordshire; later followed by Welwyn Garden City in the same county. Many have proposed more, and a new one – Ebbsfleet – is currently under construction in Kent.

Now though, at a time when the UK has a chronic shortage of homes, we could do with more of these utopian developments. However, this government believes that we don’t need many more new garden cities, so we’re now looking forward to just 14 new garden villages in rural regions, smaller projects of between 1,500 and 10,000 homes are intended to continue the Government’s commitment to support locally-led development and to “make sure this is a country that works for everyone.”

Cue cynical comment from pundits across the UK, which is unsurprising, given the lack of achievement in providing more housing by successive governments since they decided that prefabs were a bad idea.

However, let’s be positive. The fourteen new garden villages – from Devon to Derbyshire, Cornwall to Cumbria – will have access to a £6 million fund (which sounds an exceptionally tiny amount, doesn’t it?) over the next two financial years to support the delivery of these shiny new projects.

There will also be three new garden towns in Aylesbury, Taunton and Harlow & Gilston – and a further £1.4 million of funding to support their delivery.

This money, says Mr Barwell, will be used to unlock the full capacity of sites, providing funding for additional resources and expertise to accelerate development and avoid delays. He said, “Locally-led garden towns and villages have enormous potential to deliver the homes that communities need.

“New communities not only deliver homes, they also bring new jobs and facilities and a big boost to local economies. These places combined could provide almost 200,000 homes.”

To further the sense of newness, these developments will be distinct new places with their own community facilities, rather than extensions to existing urban areas.

THE BUILDERS LOVE IT

In addition to funding, the government says that it will provide support in terms of expertise, brokerage and offer of new planning freedoms, so the nation’s developers must be very excited, although we don’t know who they are yet.

WHAT IS A GARDEN TOWN OR VILLAGE?

By 2020, more than 25,000 housing starts are expected in garden villages, towns and cities supported by the government. Homes are already being built in several locations, including Bicester, Basingstoke, Didcot, Otterpool Park in Kent, Ebbsfleet, Aylesbury, Taunton and North Northants.

The new garden projects will also have access to infrastructure funding programmes across government, such as the new £2.3 billion Housing Infrastructure Fund announced at this year’s Autumn Statement.

These are in addition to the four Garden Towns that the DCLG announced a while back and a further three new towns will be added in Aylesbury; Taunton and Harlow.

An allocation of funding has also been pledged to help facilitate these sites and to “bring about the swift implementation of 25,000 of the total 200,000 homes being started as soon as 2020.”

Kevin Ellis, founder of the Land and New Homes Network, believes the decision provides plenty of opportunities for agents. He urged agents to be more positive, proactive and decisive to reap the potential rewards, “There’s been a lot of scepticism about the news from some people about whether the Government can or will hit its targets. But any amount of new homes represents opportunities for agents.

“My view is that it is clearly very welcome news as it recognises the need for more housing and enables new communities to be created. The opportunities for estate agents are self explanatory, however from an agent’s perspective it’s about being proactive rather than reactive, once site specific proposals are advancing

“Agents need to tune in to the respective house builders/land promoters early on and demonstrate expertise and credible advice both in terms of values, product demand and specification which can be substantiated.

“These sites are unlikely to be built exclusively by one developer therefore it’s important to be flexible and understand each one’s requirements.

“In some instances these locations could present an excellent opportunity for a proactive agent to take the edge and secure a commercial unit on the sites which will typically have very few A3 specific units and therefore secure an anchor position as the agent of choice.

“Many agents have taken a similar approach on volume sites in the past with huge success.

“Addressing the housing shortage is, quite rightly, a Government priority and leading agents can position themselves as their area’s new build experts and benefit from new and ongoing business.”

Adam Hesse at Aston Mead is equally positive, “The creation of 200,000 new properties in these garden towns and villages will not only provide a high quantity of homes, but also bring the jobs and facilities the local communities so desperately need.

“Meanwhile, when it comes to starter homes, dynamic and pro-active local authorities are clearly at an advantage. The first 30 have been chosen on the basis of their potential to build the homes quickly.

“So these announcements undoubtedly make for an excellent start to the New Year; but the government shouldn’t just sit on its laurels. It must keep the momentum going and deliver this many homes every year from now on. We desperately need more initiatives like this – building on both brownfield sites as well as the less attractive areas of green belt – in order to help alleviate the UK housing crisis.”

Along with the new towns and villages, ‘thousands’ of new Starter Homes are to be built on brownfield sites across the country, backed with financial support to help more first time buyers into home ownership.

They will be built exclusively for first-time buyers between 23 and 40 years old at a discount of at least 20 per cent below market value.

The first wave of 30 local authority partnerships – selected on the basis of their potential for early delivery – will spearhead schemes under the government’s £1.2 billion Starter Homes Land Fund.

Loftus Garden Village in Newport, Wales, built on the site of a former Pirelli factory.

These new developments are also to support the wider growth and regeneration of local areas, including some town centre sites. 71 sites across the country have already received investments, including land at: Plymouth, Bury, Basildon, Stockport, Bridgwater, Cinderford, Minehead, Bristol, Trafford, Isle of Wight, South Ribble and Swindon.

Industry experts were guarded in their support. Mark Hayward, Managing Director, NAEA, said, “This announcement may feel like a welcome start to the year but as always we need to see these plans put into swift action. The dream of home ownership is too far out of reach for thousands of aspiring first time buyers (FTBs), and building new homes on disused brownfield sites, as well as a 20 per cent discount for buyers aged 23-40 will go some way to bridge the gap. News that the Government will deliver 14 new ‘garden’ towns and villages will also relieve some pressure on supply and demand, which should act as a catalyst to help FTBs fulfil their dreams of home ownership. However, we must not throw caution to the wind. The Government has made pledge after pledge to help FTBs get on to the housing ladder, but until we see these houses built we won’t hold our breath.”

David Bainbridge, Partner, Planning at Bidwells, said, “The £1.2 billion Starter Homes Land Fund announcement by the Government is welcome news for those seeking a step on the housing ladder.

“The fund shows commitment by the Government to deliver on its previous announcements on the Starter Homes initiative. “The fund should support the delivery of housing on sites by stimulating wider demand but more is needed. Starter Homes need to be formally recognised as affordable housing in the planning system which will need an update to the National Planning Policy Framework.

“More detail is eagerly anticipated in the Housing White Paper which is due for publication very soon.”

The 14 new garden villages are:

The three new garden towns are: