Sign in or Sign up
The essential site for residential agents
Home » Features » Is the Green Deal a good deal?
previous next
Regulation & Law

Is the Green Deal a good deal?

There’s a lot of chatter about how the Green Deal will impact on estate agents. Stephen O’Hara busts some myths. 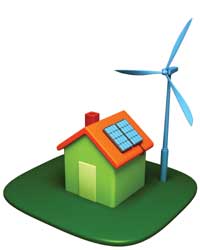 The Green Deal was first announced by the coalition Government as part of the Energy Act, which came into force in October 2011. The initiative has been hailed by the Government itself as a way of “revolutionising the energy efficiency of British properties”. It will introduce a new financing mechanism, allowing consumers and businesses to borrow the necessary funds to make energy efficient improvements to their properties.

To qualify for Green Deal finance, the proposed changes must meet the golden rule…’

Unlike any other finance deal currently available, under Green Deal finance, the consumer or business owner can opt to pay back the cost of the energy efficiency measures in installments, through their energy bill – with the guiding principle being that the energy savings that you make as a result of the changes will eliminate any impact on your existing energy bills.

While it has received a mixed response from both the public and the industry, these new measures have the potential to significantly reduce the UK’s energy consumption and as a result, its carbon emissions; the first loans are to be available from October this year.

SO WHAT DOES THE GREEN DEAL MEAN FOR ESTATE AGENTS?

As an estate agent, you may feel that you will not be directly impacted by the Green Deal and its forthcoming introduction. However, once the Green Deal has been officially launched to the market, consumers are going to be increasingly aware of the scheme and are likely to have a number of questions about how it works and how it could help them. While the majority of those considering Green Deal finance will be existing home owners or tenants, it will also be a consideration for future buyers and tenants – could/should they access green finance for their future purchase? As a tenant, can they access the Green Deal finance and how might this impact on their future fuel bills? What does this mean for the landlord?

While as an agent you will not be expected to provide any form of official advice and guidance, you may be a buyer or a tenant’s first port of call and it will be important that you have a fundamental understanding of the Green Deal and are able to point your potential buyers/tenants/landlords in the direction of a suitable Green Deal provider, who will be able to explore the options with them in more detail.

In the longer term of course, as an agent, you are likely to be selling or letting properties that have a Green Deal attached to them. If a homeowner or tenant takes up the Green financing deal, this loan stays with the property and not the buyer/tenant, should they move on. This may spark questions from future buyers, as well as landlords and tenants as we see more properties with these Green Deal loans attached come onto the market. As a result, it will be increasingly important that as an agent, you are aware of the facts and can talk knowledgeably to your customers about the implications.

So what is the Green Deal in a nutshell?

The Green Deal will help business and consumers to improve the energy efficiency of their properties without them having to pay for doing this upfront. Instead, the property owner or tenant can pay back the cost of the loan through installments, which will be tagged to the property’s energy bills. The idea is that the cost of the loan will be covered by the energy savings. To qualify for Green Deal finance, the proposed changes must meet the Government’s ‘Golden Rule’.

There is still a lot of confusion surrounding the Green Deal, with a lot of misinformation circulating and incorrect assumptions being made. Here, PEPA aims to set the record straight and to address some of the current misconceptions – which may be put to you by your clients.

Myth
The Green Deal is too complicated – I wouldn’t even know where to start.
Reality
The Green Deal provider will take care of all the details for you. The options for improving the energy efficiency of your property will be clearly explained and the implementation will be undertaken by accredited installers. Once the installation is complete the repayment of a Green Deal loan comes directly from your electricity bill and will be set up automatically. We expect some homeowners will elect not take out a Green Deal loan and to use other sources of funds to pay for the energy improvements recommended in the Green Deal report.

Myth
It will put future buyers off if my home comes with a loan attached.
Reality
If there is a Green Deal loan attached to the property the repayments come from the electricity bill. It is likely that the cost of the repayments will be offset by reduced energy bills as the energy efficiency of the property will have been improved by the Green Deal measures implemented. There are many buyers that are looking for an energy efficient property and implementing Green Deal measures and reducing carbon emissions may indeed help to sell the property.

Myth
It could make my home un-mortgagable in the future.
Reality
The Council of Mortgage Lenders (CML) and the Building Societies Association (BSA) have both indicated that the existence of a Green Deal loan will not have any impact on the availability of mortgages.

Myth
It will end up costing me money to do.
Reality
In order for an energy efficiency measure to qualify for the Green Deal it must meet what is known as the ‘Golden Rule’. This rule stipulates that the cost of the measure must pay for themselves during their economic life – in other words it makes financial sense to implement Green Deal measures.

Myth
It will take too many years for me to reap the benefits for it to be worth it.

Reality
The recommendations to improve energy efficiency will be many and varied. Some will have very quick pay back while others may take several years. The average time spent in a home is now over 12 years and therefore it is likely that the great majority of measures recommended will have a pay back during that time.

Myth
As a landlord, I can’t stop a tenant from signing up to this and then leaving me to foot the bill when they move on.
Reality
As a landlord the Green Deal provider must get your consent to implement any Green Deal measures and attach a Green Deal loan to your property.

Myth
Landlords will be liable if the tenant defaults.
Reality
The tenant, as the electricity bill payer, will be responsible – as is currently the case with energy bill defaults.

Stephen O’Hara is Chairman of the Property and Energy Professionals Association (PEPA). The Property & Energy Professionals Association (PEPA) is a trade body which represents business that is engaged in the provision of Energy Performance Certificates (EPCs) and Display Energy Certificates (DECs). Members of the Association include companies that undertake and distribute EPCs and DECs, the accreditation schemes that oversee the products, the energy assessors that produce them and the technology companies that support the industry.