Sign in or Sign up
The essential site for residential agents
Home » News » Agencies & People » Is this the ‘most stylish’ estate agency billboard in the UK?
previous next
Agencies & People

Is this the ‘most stylish’ estate agency billboard in the UK?

Judges in a national competition organised by Billboard Media thought so after being sent entries from dozens of firms across the UK.

An estate agency in Peterborough has won a national award for the most stylish billboard advertising just nine months after the business was established.

Frank Modern, which does not have a high street branch and instead operates from a commercial office in the Cambridgeshire city, has been given the accolade by Billboard Media, the UK’s leading billboard and outdoor direct sales company, which chose the agency’s ad (pictured) as the ‘Most Elegant’ from dozens of entries across the UK. 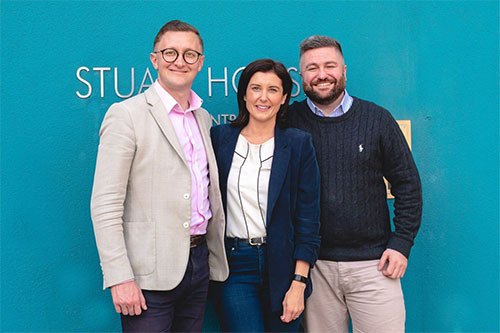 The estate agency was founded by husband and wife Morgan and Michael Parry and friend Callum Wood (pictured, LtoR).

All three are seasoned property industry operators including experience working in national and local estate agency including at Foxtons, but also customer service and recruitment.

The Woods, who had been living in London before moving back to Peterborough to raise their children and be close to family, designed the simple poster themselves prior to it appearing on the town’s Crescent Bridge.

“It’s been a turbulent time for us over the last few months but we have formed a great team and the reviews for our work have been great so far so we are looking forward to things picking up in the coming months,” Michael Parry told local media.

“During the pandemic, the market has been a hard one – There’s been a lot of people wanting to buy a house but not enough properties on the market to sell.”

This campaign captures the viewer’s eye, while providing them with the most important information.”