Are estate agents responsible for identifying this problematic weed? We asked Conor Leyden, a specialist in invasive species. 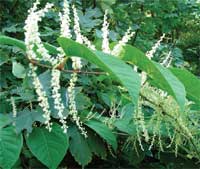 Press reports are worrying home owners about weeds that can devalue a property or grow through the kitchen floor and invade the house.

House sales have fallen through and remortgages refused because of the presence of Japanese Knotweed and treatment specialists are taking an increasing number of calls for advice whenever the press report on it, but how serious is the problem and are estate agents liable for its identification?

There is no specific responsibility on estate agents in relation to identification of Japanese Knotweed, but if its presence is known about there is a duty to inform the purchaser during the sale process. The OFT says that its presence is ‘material information.’ More importantly, a rising number of sales fail at mortgage stage due to the presence of Japanese Knotweed and Valuation Surveyors are becoming more nervous about the it.

Banks will lend on properties that have insurance, such as the INNSA guarantee, but timing is everything – if an infestation is found at the valuation it may take the vendor weeks to obtain advice, treatment and an Insurance Backed Guarantee – meanwhile the sale is lost.

If a property is suspected of having Japanese Knotweed, identification is crucial. This is a perennial weed but it takes on four very different stages of growth. Depending on when a survey takes place, the weed can be almost unrecognisable or easily mistaken for other plants.

Early growth looks similar to asparagus; in September, cream flowers cover the plant. In winter the stems turn brown and without the leaves, identification is difficult. You can download identification cards that are handy when carrying out a survey; the Invasive Plant Company has a useful download and the Non Native Species Secretariat has identification pages of Japanese Knotweed and other invasive species.

While there is little any surveyor can do to counteract concealment, they can protect themselves. As Japanese Knotweed is so prevalent, photos of the external space to the property is usually enough to protect your Professional Indemnity Insurance. From a photo it will be straightforward to determine if the Japanese Knotweed was cut down or concealed at the time of the survey.

A developer purchased a terraced house in London, modernising it prior to resale for £2 million. The works involved a single storey kitchen extension to the rear garden before a high spec modernisation.

The initial purchase did not involve a mortgage, so there was no valuation survey. At commencement of the works a number of mature Japanese Knotweed plants existed in and beyond the proposed extension area.

The next year, Japanese Knotweed appeared in other areas, in particular adjacent to the newly constructed kitchen. It became clear that this growth was ignored by the developer and that the infestation was far greater than envisaged.

While the original areas of infestation were covered by our works, further outbreaks of Japanese Knotweed were not. The patio was being broken up by the weed and growth was heading for the extension.

The client instructed us to investigate and we then excavated under the patio and up to the house foundations. Mature Japanese Knotweed had spread beneath the extension and the owner had to move out while we removed 60 tonnes of contaminated soil through their new high spec house and costs totalled £18,000.

This may be an extreme case of concealment but it does happen and can result in significant costs and inconvenience for the homeowner, raising questions as to why this wasn’t spotted at the valuation survey. This is where a record of the condition of the garden at the time of the survey is invaluable.