Labour plans to use Help to Buy ISA to boost the number of new homes being developed. 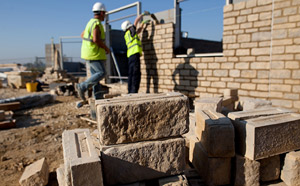 Labour plans to introduce a housing bond system to generate up to £5 billion to fund the construction of up to 125,000 new homes if elected at next month’s General Election, the party has said.

Using the Help To Buy ISA, which was announced for first-time buyers by the Chancellor, George Osborne,as part of his Budget last month, the new bond scheme would enable house builders to develop significantly more new homes
Income from the ISA would be placed into a “future homes investment fund” for new residential property schemes and is similar to housing bonds used in the 1920s to stimulate housebuilding.

The fund, designed to help tackle the chronic housing shortage in this country, will be targeted at new sites with first-time buyers offered priority.

In a speech to Labour supporters in Warrington on Saturday, Ed Miliband (left), said, “There’s nothing more British than the dream of homeownership. Starting out in a place of your own. But for so many young people today that dream is fading.”

Describing Labour’s plan as the “first real plan for housebuilding in a generation”, Mr Miliband has vowed to deliver at least 200,000 homes a year by the end of the parliament, if elected next month.

He continued, “We won’t let those large developers just hoard land – waiting for it to go up in value when it could be used to build homes. We’ll say: either you use the land or you lose the land. We will build a new generation of towns, garden cities and suburbs creating over half a million new homes.

“We will make housing the top priority for additional capital investment. And today I can announce the next step in our plan. The next Labour government will create a new future homes fund. The banks will benefit from the taxpayer support we will provide to help people save for their first home.

“In return, we will expect the banks to invest in homes for the next generation – unlocking £5bn for 125,000 homes. A Labour government will get Britain building again.”

The Federation of Master Builders (FMB) which recently launched its “Programme for Government: 2015 to 2020” designed to help increase the supply of much needed new build homes in this country, is calling on the Government – whichever party is elected – and property industry to collaborate to develop at least 200,000 homes a year by 2020 in order to tackle the housing crisis.

Speaking at high profile cross-party event in Parliament last month, Brian Berry, Chief Executive of the FMB, said, “In England we’re only building around half the number of new homes required to meet the demand for housing. Regardless of which party or parties take the reins in May 2015, the next Government must work with industry to develop a robust housing strategy and commit to building at least 200,000 new homes a year by 2020. This is a realistic target and one that can be achieved if we remove barriers to small local builders.”