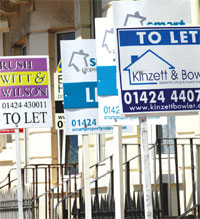 The stock of rental properties within the private sector dropped last year by 4% across the UK and by 21% in London, helping push the average rent for a property to £960 a month, and without London to £768, it has been revealed.

The East of England also saw a double digit (-15%) reduction in the number of rental homes. Five other areas also witnessed a shrinking stock of rental properties includes Scotland, the SW, Yorkshire and the Humber, East Midlands and the NW.

This reduction in the stock of privately rented homes, set against a trend of increasing numbers of tenants, is helping push up rents, Countrywide says. Rental increases have jumped by a third from 1.8% in 2016 to 2.4% during 2017.

The figures also reveal that forty-six per cent of landlords increased the rent when re-letting their home, up from 37% in 2016.

The market where rents are rising the fastest is in London, where they increased during 2017 by 3.2%, a reversal in fortunes for the capital. During 2016 they dropped by 0.8%.

“Last year saw the rate of rental growth pick up to get closer to its long-term average,” says Johnny Morris, Research Director at Countrywide.

“Most of the rise comes from a pick-up in rental growth in London, after falls in 2016.

“Rents rose across every region of Great Britain last year, although the north of England saw rents rise at a slower rate than they did in 2016.

“Rental growth has been supported by a fall in the number of homes on the rental market, with the biggest fall in London.  It looks like increased competition between tenants for rental homes will drive faster rental growth during 2018.”