Landlords in Scotland to be hit by tax crackdown

A new 3% levy for acquiring second homes in Scotland will be introduced next year. 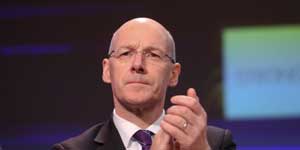 Scotland’s Finance Secretary John Swinney (pictured) has announced that a 3 per cent levy will be charged for people acquiring second homes and buy-to-let landlords in addition to the existing Land and Buildings Transaction Tax (LBTT), which replaced UK stamp duty in April.

The Scottish Fiscal Commission, the official watchdog of the Scottish Government’s tax and spending plans, estimates that the supplement on LBTT, which will be introduced in April 2016, will affect between 8,500 and 12,500 transactions annually, and could raise up to £27 million.

The LBTT system, which raised £218 million in its first seven months, uses a graduated tax rate, working in a similar way to income tax.

Swinney commented, “We need to ensure that the opportunities for first-time buyers to enter the market in Scotland are as strong as they possibly can be and we need to make certain that tax changes elsewhere in the United Kingdom do not make it harder for people to get on the property ladder.

“That is why I today announce my intention to introduce a supplement to LBTT for those purchasing an additional home for £40,000 or more.”

The announcement regarding the introduction of a 3 per cent surcharge on the full purchase price of all additional property from April next year will undoubtedly lead to a flurry of second home purchases and buy-to-let property sales before the end of March to beat the deadline, according to John Blackwood, Chief Executive of the Scottish Association of Landlords.

He said, “Landlords will be disappointed and frustrated by the decision by the finance secretary this afternoon to copy the policy of the Conservative Party at Westminster and punish those who choose to invest in the private rented sector Scotland.

“The supplementary tax on the purchase of second homes will have a huge impact on the buy-to-let market and exacerbate an already serious shortage of properties in many areas.

“We firmly believe that the biggest losers from today’s statement will be tenants who will now find it even harder to get the accommodation they want at a price they can afford.”

Ashley Campbell, the Policy and Practice Officer at the Chartered Institute of Housing Scotland, has welcomed the proposals to increase LBTT for second homes and buy-to-let properties but would like to see more details of where the additional revenue raised will be invested.

He commented, “Our preference would be for these funds to be re-invested towards increasing housing supply.”

Earlier this year, the Governor of the Bank of England, Mark Carney, expressed concern that buy-to-let posed a threat to wide UK economic stability.

He fears that property investors might sell in large numbers, which could destabilise the economy, should home prices start to drop.