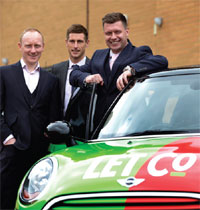 Hampshire-based lettings only agency LetCo has doubled in size after acquiring rival Top-Let, increasing its reach throughout the Solent region.

Top-Let, which was established in 2008 by two former landlords Paul Smith and Christopher Page, will adopt the LetCo name as well as its red and green branding, creating a merged operation that now manages almost 700 properties across central south of England.

LetCo now has four offices in Portsmouth, Park Gate, Whiteley and Southampton. Its operations director Rob Leatherland says: “Our success is built on local knowledge, an understanding of what tenants are looking for, strong relationships with landlords and developers and outstanding customer service.

Joining the LetCo team from Top-Let is Simon Hill, who takes up a new role as LetCo’s Commercial Director. Simon believes the lettings marketplace has never been more exciting, “I don’t think there’s ever been a greater focus on the need for quality property as there is today. LetCo understands this – its portfolio of properties proves that beyond any doubt.”