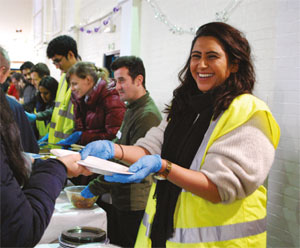 Christmas is for friends and family – which homeless people may not to experience so this feed makes them feel part of the community and experience a wonderful Christmas.

Shelter says that Newham has the highest rate of homelessness in England. Data collected from the MHCLG estimated around 14,611 were people in temporary housing or sleeping rough in Newham. Lint Group wanted to contribute directly to the homeless in their local boroughs of Redbridge and Newham, Managing Director, Rizz Patel said, “After 25 years for in East London, we feel it is important to support those in need in our community.”

The Lint Group chose to support Bridges which offers services to help homeless and vulnerably housed people in Newham. They seek to meet their physical, material, emotional, and spiritual needs, primarily through a free hot breakfast service and friendly, supportive conversation on Saturdays. Bridges is an independent charitable organisation that grew out of the work of Memorial Community Church, Plaistow, with volunteers. Brian Dexter, Bridges Coordinator said, “It’s been great to see such a fantastic uptake; our guests are playing games, having a joyous Christmas celebration. We appreciate the support of Lint Group for us and our community.”