Designs on Property's Kate Faulkner reports on the property market 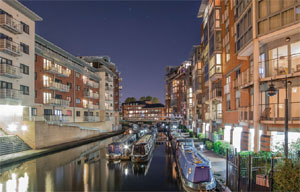 For the first time this year there seems to be a consensus on current growth rates of 3-5 per cent year on year. All the indices show that property market growth is slowing but that’s not a surprise; London has basically run out of steam and the rest of the UK is not picking up the slack as much as it has done following previous recessions.

England continues to outstrip other country growth, mainly due to the strength of London and the South (remember UKHPI data is a few months behind other indices). Wales and Scotland are growing year on year, but still haven’t overtaken 2007 heights – meaning it will be a good ten years for them to recover prices at a nominal level, let alone catch up with prices taking inflation into account. Northern Ireland may be showing strong growth year on year but this is still from an extremely low base and we may see the UK’s first evidence of a ‘real’ house price bubble there, where prices for some properties just never recover to their 2007 levels.

RICS says transactions rose six of twelve regions and fell in the other six. Not a complete disaster but tough reading.

Regionally, LSL gives a handy guide to property price growth across the country. According to LSL, rates of growth can be divided into three: the likes of East of England, South East and West show strong five to seven per cent growth; the West and East Midlands are showing “moderate” growth of around four per cent; while the North West, North East and Yorks & Humber are seeing around one per cent rises.

Sales for Q3 2016 compared with the same quarter in 2015 (LSL) look more dramatic than they actually are as all the data is distorted by the stamp duty influence in March earlier in the year, but even in areas not affected that much – such as the North East – it is clear there is a bit of a slowdown. Overall LSL suggests that, “in the first 10 months of 2016, transactions are down by 2.4 per cent compared to the first 10 months of 2015.” The RICS reported that, “transactions rose in six of the 12 regions/countries covered in the survey and fell across the remainder.” So not a complete disaster this year, but it will make tough reading for agent and property professional bosses while current volumes are down this much, suggesting they may start pulling investment and not necessarily invest in recruitment moving forward, putting a potential downward trend on the industry’s returns overall.

The NHBC said, “Following a quiet July, registrations bounced back in August and September as the industry shrugged off early nervousness following the vote to leave the EU.”

From a supply perspective, social housing stock has taken a hit with the government’s change in the way they operate and as a result, “29 per cent fewer social housing units were approved (Q2 16).”

This is a massive problem as moving forward it forces people eligible for social housing into the private rented sector where landlords and agents are then accused of not looking after them properly – often unfairly – and blamed for the corresponding increase in housing benefit costs; again, not their fault.

On the other hand, the private sector is still performing ‘well’ in comparison to recession days, albeit a relatively mixed picture on a regional basis: “half of the 12 regions showing an increase in registrations during Q3, including the South East (+56 per cent), North West (+48 per cent) and Yorkshire & Humberside (+42 per cent) with the others reporting a dip in numbers, such as Scotland (-38 per cent) and London (-45 per cent), compared to a year ago (Q3 16)”.

LSL Acadata HPI: “In September, eight of the 10 areas in England and Wales experienced a decline in their annual rates of house price inflation, compared to the previous month. The largest fall was in Greater London, where rates shrank by -1.2 per cent, followed by the South East and Wales, both down by -0.9 per cent, with Yorkshire and Humberside easing by -0.7 per cent. Two regions showed a positive movement in their rate of house price growth, being the West Midlands, up by 0.4 per cent, and the South West, up by 0.3 per cent. Overall, the annual rate of change in prices, at 3.7 per cent, was -0.6 per cent lower than one month earlier.

“In September, the East of England continued to top the leader board for the fifth month in succession as the region having the highest annual increase in average house prices, at 7.0 per cent.

The South East and the South West remained in second and third position respectively. Greater London fell another place and now stands in eighth position, having been top of the league in April, only five months earlier.”
Hometrack: “Eleven cities are registering higher rates of capital growth than in January 2016. The majority are large regional cities outside the south east of England – Liverpool, Manchester, Cardiff and Birmingham. These cities have attractive affordability on a price/earnings ratio measure with house prices rising off a low base. Annual house price growth currently ranges from 6.6 per cent in Liverpool to 8.0 per cent in Birmingham. Nine cities are registering house price growth lower than at the start of 2016 with the greatest slowdown led by Cambridge, Oxford, London and Aberdeen. Slower growth is a result of affordability, economic and market confidence factors. In the last quarter, London residential values have increased by 0.9 per cent, compared to an average of 3.0 per cent over the last three years. The recent slowdown is yet to impact the annual rate of growth which is running at 10 per cent but is expected to move towards five per cent by the year end.”
NAEA: “In September, the average number of house hunters registered per member branch increased from 287 in August, to 333. This is a rise of 16 per cent and takes the number of prospective house buyers recorded up to the levels seen back in June, when estate agents recorded 330 on average per branch. 23 per cent of sales were made to FTBs – a decrease of five percentage points from August and the lowest level seen since November last year when 21 per cent of sales were made to the group.”
RICS: “New buyer enquiries increased for the first time in seven months. Nevertheless, the headline figure masks considerable variation across the UK, with some agents seeing a more stable trend in demand emerging as opposed to any recovery just yet. Nationally, agreed sales were broadly unchanged for a second month running, having declined sharply from May through to July. The regional picture remains mixed however, as transactions rose in six of the 12 regions/countries covered in the survey and fell across the remainder.”
Bank of England: “The number of loan approvals for house purchase was 62,932 in September, compared to the average of 64,841 over the previous six months.”
BBA: “Gross mortgage borrowing of £12bn in the month was 2 per cent lower than in September 2015. House purchase approval numbers are 15 per cent lower than in September 2015 and in the first nine months of 2016 they are 3 per cent lower than in the same period of 2015.”
Rightmove: “Six northern regions (North West, North East, Yorkshire & the Humber, East Midlands, West Midlands and Wales) had an 11 per cent fall in the total stock for sale compared to the same period in 2015, continuing the downward trend. This reduction in choice for buyers hampers their ability to negotiate and gives sellers the confidence to ask higher prices and hold out for the asking price. The sales agreed have risen by three per cent in these regions compared to the same period a year ago.”