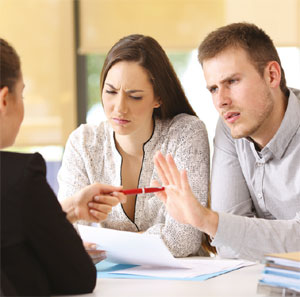 These figures alone demonstrate that growth in the service TPO provides has been quite extraordinary, with workload rising exponentially each year. One thing I am keen to point out, is that this rise does not necessarily suggest that agents’ standards have deteriorated, but rather that consumers are increasingly aware of their rights, particularly off the back of the Government’s consultation into strengthening redress in the housing market, and subsequent media publicity on the future of consumer protection and driving out poor practice in the industry.

My primary focus at TPO has always been on providing expert advice and quality outcomes. The early advice we give plays a key role in empowering consumers by equipping them with information so they can try and resolve the issue directly with their agent. Our Early Resolution approach seeks to resolve straightforward disputes quickly and our Adjudication Service is wholly focused on fair and reasonable outcomes based on the evidence provided. 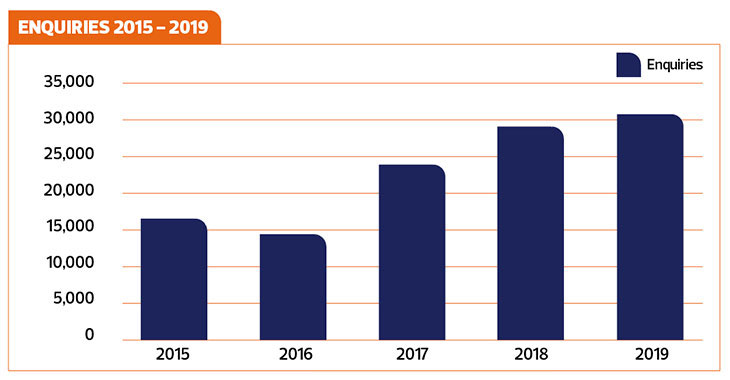 On this point, I would draw attention to the percentage of supported cases in 2019 for sales, lettings and residential leasehold, which were 63 per cent, 67 per cent and 49 per cent. This highlights that it really is worthwhile agents keeping a good record of all consumer communications as evidence and then presenting their case to enable TPO to come to the right conclusion.

When things do go wrong, we help put it right, by enquiring, signposting, providing early resolution.

Despite rising figures, the most common complaint trends have remained the same; communication and record keeping followed closely by complaint handling. In addition, within the lettings arena, management is always an issue of concern.

It is not surprising that with the rising number of cases received, the levels of awards have gone up from £811,134 in 2015 to £2.2 million in 2019 – that is a 171 per cent increase. Awards are not made to punish the agent; they are made to put the consumer back to where they should have been before detriment occurred. Detriment is defined as: 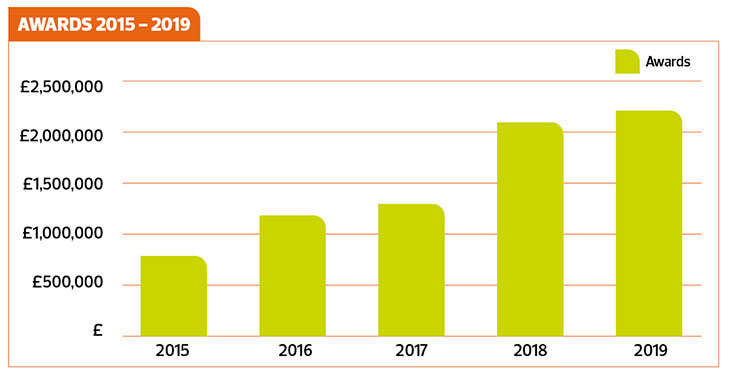 The Property Ombudsman is here to get it right, put it right and set it right. We take a continuous improvement approach to the services we provide, enabling us to meet the needs of consumers more efficiently, and to do all we can to help agents get it right and raise standards in the industry. To help facilitate this over the last five years we have had two major reviews of the Codes of Practice and provided guidance, Primary Assured Advice, newsletters, workshops and conferences.

When things do go wrong, we help put it right, by enquiring, signposting, providing early resolution or determining complex complaints.

In terms of setting it right, TPO works collectively with regulators and the industry to raise standards.

This is very important, and I think most agents will agree this has been quite a period of change. TPO alone has responded to 29 government consultations in the last five years, all of which have been substantial, all of which point to the need for higher professional standards and a level playing field for agents.

When we see an emerging issue which is causing rising levels of consumer detriment, we raise it and take action to prevent or combat it, such as the charging of dual fees which remains a concern. One of the most effective ways we have done this is by introducing our industry and consumer forums, which meet three times a year. This is an external facing, open and transparent way of raising and discussing issues. The forums work side by side to discuss, analyse and recommend steps to reduce problem areas for consumers and clarify standards.

A more recent example of this was the emerging practice of video viewings, which came following lockdown and for which we obtained Primary Assured Advice to help agents navigate this new way of operating. Another example is the use of CCTV in rental properties, which was brought to our attention when tenants discovered, after moving in, that the CCTV at the property which they knew about, was also controlled by the landlord. They had thought that it was for their use, controlled and accessed only by them. In fact, the landlord had remote control at his house and could access all images and control the dome camera.

Despite the CCTV being clearly on display, neither the tenants nor the agent thought to ask what it was filming and for whose benefit. My advice to agents is always ask the questions. You are the professional; you should know everything it is possible to know about the property.

I have had many standout moments as Property Ombudsman and I have always tried to ‘tell it as it is’ to agents and stakeholders. I have especially enjoyed working with the TPO team who, in my opinion, are second to none in their commitment, expertise and resilience in handling rising complexity and workloads.

Working in collaboration for positive change and progress has been a particular focus for me and I am very proud to have taken a leadership role with the RICS to make progress on Lord Best’s RoPA recommendations for an Overarching Code of Practice.

I wish Rebecca Marsh every success as she takes on an organisation in good shape and ready, willing and able to contribute to redress reform which provides integrated pathways and closes the redress gaps, and which supports a regulatory framework and professional qualifications.