Sign in or Sign up
The essential site for residential agents
Home » Features » Manifestos, markets and mansions
previous next
Regulation & Law

Election fever is here. The countdown has begun. Jeremy Leaf reviews pre-manifesto statements to see what could happen on 7th May.

The media’s election circus is on the move with phrases like “Labour win is a disaster for homeowners” and “Do Conservatives care about cities?”

So what can we expect from the parties if they come to power? Will the property market continue to grow or will we see prices plummet?

The hottest topic in housing policy is Labour’s Mansion Tax. This policy has mass appeal with many wanting to ‘bash the rich’ but it is not based on an ability to pay. So what could it do to the property market?

Uncertainty created by the mere threat of mansion tax is already compromising prices and transactions and not just those above £2million. Some owners of property worth more than £2million are reducing prices, those with homes below the threshold are trying to inflate prices – as for those homes worth around £3million, where annual duty is likely to rise from £3,000 to £30,000 per annum, appeals are inevitable.

The Liberal Democrats were the first party to propose such a levy in 2009 but they have modified their policy. Now their plan is to create additional council tax bands for homes sold for more than £2 million.

Mansion tax will act as disincentive to acquire freeholds or larger leaseholds and extension and/or improvement properties could also suffer. Conversion into two or more flats to reduce value could also result.

The Conservatives say that their changes to the Stamp Duty threshold mean there is no need for a Mansion Tax. I believe there’s a strong case to tax higher value property more heavily. Additional Council tax bands would be a fairer compromise; rates haven’t changed since 1991, so we have the situation that every home worth £320,000 or above pays the same.

Another significant issue in this election is housing supply. All three main parties say they have plans to build more homes as we’re still only building around half the number of homes we need.

Labour says it will build 200,000 new homes a year – including new towns and garden cities – and it plans to double the number of first time buyers by 2025.

We’ve taken action against one of the worst designed taxes of all time: Stamp Duty. By abolishing the slab rate – which hurt homebuyers at the lower end of the price band – 98 per cent of homebuyers now enjoy a tax cut.” Brandon Lewis, Housing Minister, Conservatives

The Conservatives have committed to building 100,000 new starter homes which people under 40 years of age will be able to buy at 20 per cent discount. The LibDems say they will create more Garden Cities and build 300,000 homes a year.

These proposals sound great but the reality is that insufficient land is being available quick enough by local authorities and institutions. Borrowing money for smaller builders and developers is still too expensive and mired in red tape whereas planning delays are a deterrent for many.

The other problem is that many young adults simply can’t afford to buy their first home despite government initiatives. In the UK, the average cost equates to seven times salary compared to 4.5 times in the 1960s – and they need, on average, £30,000 required deposit, not the £3,000 needed 30 years ago, according to the National House Builders Federation.

The problem is, of course, much worse in London.

Another thorny issue for all the parties is private renting. The rental market is growing at a staggering pace resulting in lettings becoming a political battleground. Over nine million people now live in the Private Rented Sector so there are many votes to play for, this figure represents over 25 per cent of all households in London alone and is rising.

Labour has proposed a number of ways to better protect tenants. The party plans to introduce three-year tenancy agreements during which rents would be capped. They are also proposing to abolish some letting agency fees.

Landlords haven’t shown much enthusiasm for these plans with up to two thirds saying in a recent survey for the Residential Landlords Association, that they would leave the sector as a result.

If landlords do leave, the Conservatives believe that less choice, lower standards and higher rents will be the result. However, according to HMRC, there are 1.63 million buy to let landlords in this country and many of them work in the House of Commons as MPs so I predict this policy is unlikely to see the light of day.

The Conservatives want more people to buy into the property market, especially young people. To help them they’re proposing that good social tenants should be given seven years during which they can live in rented accommodation at a discounted rate so they can save enough money to buy a property.

We will set an ambitious target of increasing the rate of housebuilding to 300,000 a year. Within the first year of the next Parliament, we’ll publish a long term plan which sets out how this goal will be achieved and appoint a ministerial taskforce on housing, hosted by the Cabinet Office, to oversee this task.” Stephen Williams, DCLG Spokesperson, Liberal Democrats 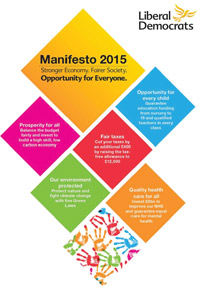 The Liberal Democrats are planning legislation to prevent ‘revenge evictions’ where tenants who complain about bad housing are immediately turfed out by rogue landlords.

14 per cent of families renting in London are said to have been hit with ‘revenge evictions’ so there’s clearly a problem, but legislation to remedy it could prove problematic and deter landlords from the market. The fewer landlords there are, the less choice tenants ultimately have in the properties that are available.

The Green Party say they would abolish the Right to Buy, build 500,000 social rented homes by 2020 which would be paid for by scrapping buy-to-let mortgage interest tax allowance. The Greens would also give councils the power to borrow money to build houses or buy them on the open market and introduce a rent cap to ‘prevent exploitation by private landlords.’

All three main parties have set out plans to improve the property market, but what seems apparent to me is that there is clearly no common thread between the parties. Policy differences remain as wide as ever. But all main parties do agree on one thing – we need to increase the supply of affordable homes to buy and rent, especially for younger people.

There is a wildcard in this General Election and it’s called UKIP. Their housing policy seems at best confusing and possibly illegal. They want only those with a parent or a grandparent who was born in the locality to be able to access social housing. This policy is likely to fall foul of discrimination laws and, maybe, even the Human Rights Act.

If UKIP were to win the election they say that they would pull the UK out of the EU and, in my opinion, that would be the biggest disaster for this country. Half our trade is with EU countries and if that stops then the housing market will certainly stall.

In my experience, uncertainty over the election is likely to have even more implications for builders/developers than for buyers and sellers. Some of our builder/developer clients tell us they are reluctant to get involved in creating further schemes until they know whether for instance mansion tax will remain an issue.

We are not even building half the number of homes that we need to keep up with demand. Under this Tory-led Government we have seen the lowest level of housebuilding in peacetime since the 1920s.” Emma Reynolds, Shadow Housing Minister, Labour

Labour is suggesting that new build properties may only be offered to owneroccupiers rather than investors. The party probably does not appreciate how many schemes are underpinned by buy-to-let sales and may not otherwise be constructed. Whatever the result of the election, a shortage of skills, materials and supply will continue to restrain demand/sales but the inevitable interest rate rise, whenever it comes, will certainly reduce affordability.

A price war among lenders is pushing down borrowing costs for those able to meet stricter lending criteria so homebuyers are saving thousands of pounds in repayments compared with just a year ago. Furthermore, lower interest rates and the possibility that we will see zero inflation this year, as predicted by the Governor of the Bank of England, means each monthly payment makes a larger dent in the capital value of the debt.

Sadly, the difficulties of obtaining finance, especially for smaller developers and the delays in gaining planning consent will constitute a problem until more radical action is taken.