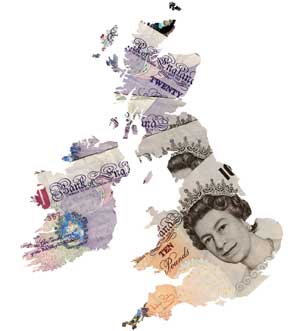 Government policies, a possible share market crash and Britain’s economic uncertainty are the three primary perceived risks that UK millionaires have for the security of their wealth, according to research commissioned by investment firm Skandia for its Millionaire Monitor report (www.skandia.co.uk/millionaire-monitor).

But property is still the favourite investment with the largest focus being on British bricks and mortar.

Almost four out of five (78 per cent) of UK millionaires feel the economic crisis has changed the investment landscape and around two thirds (65 per cent) say it has changed their expectations for future investment returns. As a result, UK millionaires are spreading their money across a mix of investments in order to diversify their risk, with property accounting for a third of their wealth. This is significantly more than any other investment type, with cash accounting for a fifth, shares a sixth and managed investment funds a seventh.

Male millionaires take more risk with their wealth than female millionaires, with men holding half as much again in shares and managed investment funds than women. Whereas women hold more cash than men, and are also twice as likely to invest in art, antiques, collectibles and precious metals like gold and silver.

Looking forward, the UK’s millionaires look set to continue their love affair with property, with a third saying they are planning to increase their investment in property over the next six months. A third will also be looking to benefit from the stock market by increasing their equity investments over the next six months and one in five will be increasing their holdings in managed investment funds over the same period.

However, a significant proportion remains cautious. More than a quarter will be increasing their holdings in cash, 15 per cent turning to fixed interest and 11 per cent focusing on commodities such as gold and silver. Female millionaires are more positive about property as an investment with four out of 10 (41 per cent) saying they are likely to increase their exposure to property investments over the next six months compared to just over a quarter (27 per cent) of male millionaires. Conversely, men strongly favour shares with two out of five (39 per cent) looking to increase their exposure to the

OUTLOOK FOR NEXT 12 MONTHS

Given the current economic uncertainty around the world, more millionaires have a negative outlook for the next 12 months than a positive outlook. Almost half (46 per cent) believe the general economic situation in this country over the next 12 months will get worse compared to just over a third (35 per cent) who believe it will get better. One in five (20 per cent) think the economic situation will stay the same. However, millionaires are almost equally divided in their opinion of how it will impact their household. A third (33 per cent) believe the financial situation of their household will get worse but 34 per cent believe it will get better and the same proportion again think it will stay the same.

Graham Bentley, Skandia’s investment expert, said, “People might assume that a lot of millionaire wealth is ‘old money’ and hence it would be natural for a lot of it to be tied up in property. However, that is not the case. Nearly half of millionaires say their wealth has been earned from employment income with only 14 per cent having inherited it. “This shows that property is genuinely an investment that millionaires feel comfortable with and this looks set to continue. However, it looks like millionaires will also be looking to benefit from depressed stock market valuations to increase their wealth over the next six months. As with any investment portfolio it is important to ensure you have a good mix of investment types to diversify risk but now does feel like a good time to copy millionaires and invest in equities if you are taking a long term view.”

The full ‘Skandia Millionaire Monitor’ report can be accessed at:
www.skandia.co.uk/millionaire-monitor