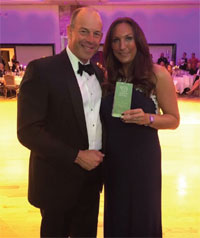 Kathryn, who opened her estate agency in Milton Keynes in April, was given the award in recognition of her work for charities such as MIND, Cancer Research and the Oasis Project, which builds schools in the Gambia.

“I really wasn’t expecting to win,” said Kathryn, who was presented with the award by Phil Spencer. “There were so many people there who’d done so much and raised huge amounts of money. I found it very humbling.”

The judges were impressed with Kathryn’s personal commitment to fund-raising, which included a sky-dive and the Three Peaks Challenge. “Not only had Kathryn organised five events and raised funds for local charities in Milton Keynes, she had also set up her own charity to tackle teenage self-harm.”

It was a particularly emotional night for Kathryn. Ten years ago her brother, Ollie, committed suicide at the age of 27 after battling with depression and mental illness. “Knowing it was the 10th anniversary of Ollie’s death made receiving the award very poignant,’ says Kathryn. “I said, this is for Ollie.“