UK rents rose by an average of 1.7% in December, HomeLet data reveals, after a year of relative stability. The average rent agreed on a new tenancy in December was £907, compared to £892 in December 2016.

This means that rental price inflation lagged the general rate of inflation in every month. The last time that rents rose more quickly than inflation was December 2016, when the HomeLet Rental Index recorded a rate of 1.7% compared to a 1.6% increase in the consumer prices index.

Nevertheless, the annualised rate of rental price inflation rose consistently during last year, with positive figures recorded in every month other than May and June, when rents slipped by 0.3% and 0.2% respectively compared to 2016.

Over the rest of 2017, rental price inflation ranged from 0.4% to 2.4%, showing much less volatility than in 2016, when rents rose at rates above 4% during the first half of the year before flattening out in the final months.

The East Midlands ended 2017 with the highest rate of annual rent increases. Rents in the East Midlands were 4.6% higher in December 2017 than in the same month previously, averaging £611 a month; only Wales and the North East offered lower rents, with an average of £605 and £545 respectively. Rents also rose by more than 3% in the South West, the North East and Northern Ireland.

In the South East rents fell in December, with the average rent agreed on a new tenancy 1.0% lower than in December 2016. Rents in the South-East fell in every month of 2017 on an annualised basis. 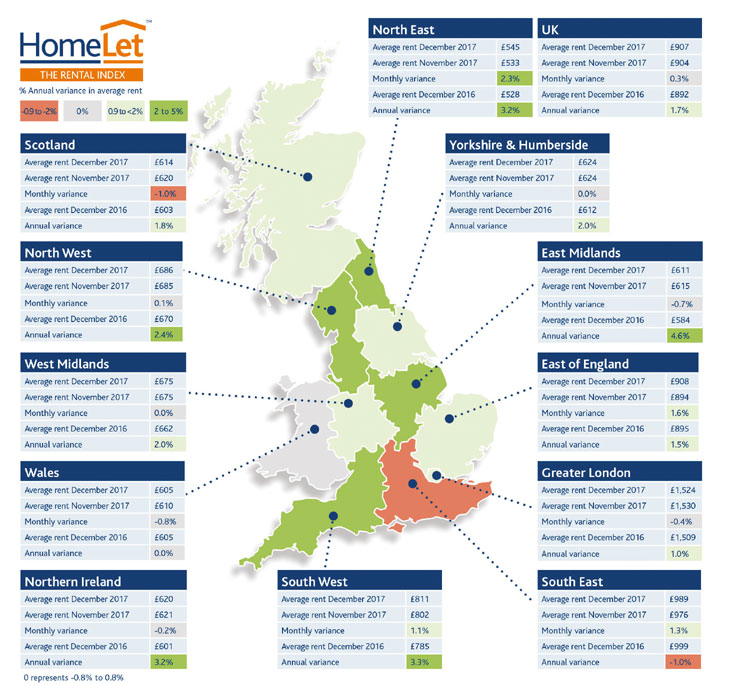