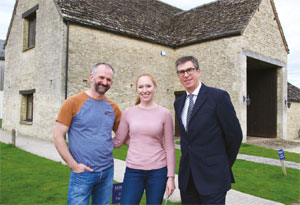 Charlcutt Barn near Calne was one of the highlights of an auction in Cirencester on 30th March, when nearly £1 million worth of property was sold in under 30 minutes by auctioneer Roy Bowyer of Moore Allen & Innocent.

One stunning sale was Charlcott Barn – just 100 yards from its buyers’ home – David Harrop and Camille Van Hoegaerden bought the barn ‘across the road’ for conversion.

Builder David and Camille, who will project manage the conversion of the modern agricultural structure into their dream home, won a round of competitive bidding to secure Charlcutt Barn for £144,000 – £19,000 more than the auctioneer’s guide price.

Their nerves held – not least because it’s not the first property they’ve bought at auction. Last year they successfully bid for a three storey Victorian terrace house in Westbury, Wiltshire which they’ve converted for rent. Charlcutt Barn, though, will be their home. “We saw it come up for auction and thought what a great place it would be for a home,” said David. “It’s got great views.”

In total, £917,000 worth of property was sold during the auction, and properties are already lined up for the summer auction.

Dubai… or not to buy? 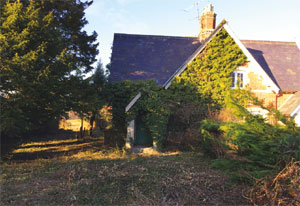 Symonds & Sampson drew an international audience to their latest auction with bidders attending from London, the Home Counties and throughout the south of England as well as telephone bidders in Austria and Dubai.

It was the first auction of the year for auctioneer Mark Lewis who said, “The intensive marketing campaign in the regional papers together with the strong presence on the internet encouraged buyers to view the properties and we had to ration some appointments as there were just too many people who wanted to look.”

Houses to improve included 69 St James in Shaftesbury with planning permission to improve selling for £185,000 to a buyer in West Sussex; Denby in Stalbridge, bought by a local family for £211,000 and Foxcroft Drive in Wimborne which sold for £325,000.

White Roses on the Leweston Estate received very strong press coverage having been owned by the Rose’s cordial family in the 1940s. The house had been occupied by staff employed at the school and was set in a wonderful position. There was good interest in the property and it sold 12% above guide at £560,000.

The most interest was reserved for a semi-detached cottage in Motcombe near Shaftesbury. The cottage had not been occupied for 8 years and needed complete refurbishment and was the subject of an improvement order from Dorset County Council. 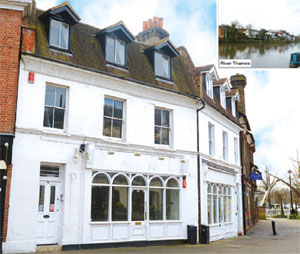 The average lot size was £368,000 and five of the properties sold achieved in excess of £1million. The largest lot to sell was lot 26 – a freehold former health centre with potential for redevelopment in Greenford, Middlesex – which sold for £2m, more than double the guide price of £900,000- £950,000.

Quality lots with redevelopment potential attracted considerable interest, such as lot 31, a mid-terrace office and retail unit in Staines (pictured). With permitted development for residential conversion, which sold for £410,000 compared to the guide price of £295,000.

Gary Murphy, partner at Allsop, said, “As ever the catalogue was very diverse, both geographically and with regard to the types of properties available, but the common theme was the importance of pricing. In particular, higher value assets and poorer quality lots, for which the pool of bidders is likely to be more limited, need keener pricing. Where lots were priced sensibly they saw competitive bidding, with many going under the hammer well in excess of the reserve.

“Having sold £17m in value prior to the action and with deals still being done on the remaining lots, the auction process has also proved a successful catalyst for sales before and after the event itself. Notably, distressed sales were at the lowest level for a number of years, which is a good sign of an improved economy.” 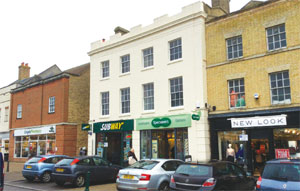 On 15th March, almost £4.2m worth of sales was achieved across 21 lots at Cheffins first property auction of the year. The sale had the highest level of pre-event interest ever recorded with 600 legal packs downloaded and over 200 buyers in attendance.

The star lot was a freehold mixed use building in Biggleswade which achieved £1,055,000 against a guide of £900,000, making it the record hammer price ever recorded at a Cheffins property auction. Generating an annual income of £50,000 from established tenants, the property brought competitive bidding within the room, eventually selling to a local investor. Similarly, a mixed use building on Ramsey High Street in Cambridgeshire sold for £208,000 against a guide price of £140,000.

The record price at Biggleswade shows how auction really is the best forum to generate interest in mixed use property.

The much anticipated Keith Leonard Estate also saw competitive bidding. Consisting of seven lots, Mr Leonard’s legacy comprised two houses and a large agricultural barn, alongside over 90 acres of both arable and garden land, one of the few traditional fenland estates to still be in existence. The Estate generated a total of over £1.25m.

Ian Kitson, Director, Cheffins, said, “Investment properties offering guaranteed yields really set the room alight in our first sale of the year. With competitive bidding from both local and national buyers, the record price made at Biggleswade goes to show how auction really is the best forum to generate the most interest for these popular mixed-use properties. As prices are continuing to rise across all property types in the region, we are expecting to see ongoing inward investment with mixed -use offerings continue to sell at premium prices.”

iam-sold’s 86% success at South Yorkshire auction iam-sold’s recent auction at the New York Stadium in South Yorkshire achieved its best success rate in the area for over a year – 37 lots went under the hammer, with 32 sold for a total of £2,444,500.

Among the properties sold at the auction were:

29 Serlby Lane, Harthill, a three-bedroom detached house which sold for its £270,000 reserve price.

Jamie Cooke, Managing Director of iam-sold, comments, “This auction demonstrates that there is strong market demand, with several lots achieving above their starting prices, driven up by competitive bidding.”

Jamie added,, “Our higher end properties in this area tend to average around £200,000, but selling something for over £0.5 million is becoming more common, especially now we are seeing an increase in the numbers of owner/occupiers in the auction room.

“It just goes to show that there is demand at all ends of the sales spectrum when it comes to property, and selling at auction helped 4 Westfield Park sell above asking price.” 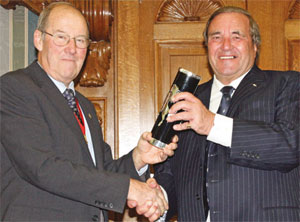 The founder and chairman of Britain’s largest independent regional land and property auctioneer has been awarded a top civic honour.

Clive Emson was presented with the Kent Invicta Award for his outstanding achievements and charity work across the county.

He received the honour from Kent County Council Chairman Tom Gates in a ceremony during a full council meeting at County Hall, Maidstone.

Clive, who founded Maidstone based Clive Emson Auctioneers in 1989 after decades of experience in then property business, was presented with a cheque for £5,000 for a Kent charity of his choice. He said, “I am absolutely delighted and amazed to have been honoured in this way by my county. Never in my wildest dreams did I expect this.”

Well-known for hosting charity auctions right across the south and a familiar face on TV’s Homes Under The Hammer, Clive added: “It is an absolute privilege for me to be in the illustrious company of Invicta Award winners – and a great boost for charity. Clive donated to three charities: