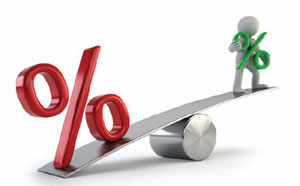 Interest rates on mortgages have hit record lows, but borrowers are being hit with higher fees, as banks look to protect their profit margins, according to figures from Moneyfacts.co.uk.

The average interest rate on a two-year fixed mortgage fell to 2.52 per cent in February, down from 3.14 per cent a year earlier and the lowest level since Moneyfacts.co.uk, which compiled the data, began monitoring the sector in 2007.

But while interest rates might be falling, banks are increasing the fees they charge borrowers to arrange a loan, with the average mortgage fee today being a full £68 higher than in June 2014 – hitting a 21-month high.

Some of the fees borrowers are being asked to pay is nothing short of shocking – up to £7,499.

“The current mortgage market boasts some of the lowest rates on record, which is great news for borrowers, but the increase in the average mortgage fee clearly shows that some of these headline grabbing rates are being compensated for elsewhere,” said Charlotte Nelson, from Moneyfacts.co.uk.

“Some of the fees borrowers are being asked to pay are nothing short of shocking, with up to £7,499 being charged for some high value loans,” she added.