Sign in or Sign up
The essential site for residential agents
Home » News » Many rental properties not affected by letting fees ban, study reveals
previous next
Regulation & Law

Survey in partnerships with Spark Energy finds three quarters of agents say it will impact at most 25% or their properties under management. 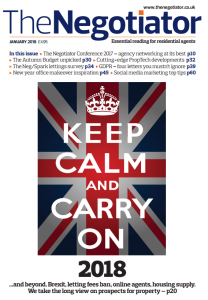 The letting fees ban may not impact agents as much as many feared it would, a survey of 30,000 agents has found.

Three quarters of those who responded to the survey by The Negotiator in partnership with Spark Energy said between 10% and 25% of their properties under management would be affected by the tenant fees ban, and that only 2% said that ‘most or all’ would be affected.

But the issue continues to worry agents, 68% of whom said it still remains their biggest worry for 2018, the survey – which is published in full within the latest issue (pictured) of The Negotiator magazine – found.

But on the ground, agents currently have more pressing operational issues to worry about than the fees ban.

Nearly a half of the agents said their biggest issues were damage to properties by tenants while 36% said problems with rental payments came second.

Some agents are also becoming irked by what they see as ‘over regulation’ of the rental sector. Among them, 45% said there was too much and 30% thought it was “about right” but, perhaps surprisingly, 25% thought regulation is too light.

“We also asked agents what the government could do to support the industry and unsurprisingly we got some feisty responses,” says Editorial Director Sheila Manchester (pictured, left).

“The most frequent were around ‘listen to the agents and their organisations, not the lobbyists’, mandatory licensing for landlords and compulsory membership of a regulatory body for agents.”