Sign in or Sign up
The essential site for residential agents
Home » News » Housing Market » We must build 200,000 homes a year by 2020 – FMB
previous next
Housing Market 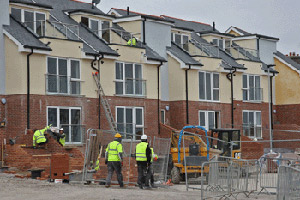 The Government and property industry must collaborate to build at least 200,000 homes a year by 2020 in order to tackle the housing crisis, according to the Federation of Master Builders (FMB).

The call forms part of the FMB’s “Programme for Government: 2015 to 2020” which was launched at a high profile cross-party event in Parliament last week.

Brian Berry (left), Chief Executive of the FMB, said, “In England we’re only building around half the number of new homes required to meet the demand for housing. Regardless of which party or parties take the reins in May 2015, the next Government must work with industry to develop a robust housing strategy and commit to building at least 200,000 new homes a year by 2020. This is a realistic target and one that can be achieved if we remove barriers to small local builders.”

The FMB’s “Programme for Government: 2015 to 2020”, was welcomed last week by the Housing and Planning Minister Brandon Lewis, Shadow Housing Minister Emma Reynolds (right) and Communities and Local Government Minister Stephen Williams, with all three MPs agreeing that far more needs to be done to boost the supply of much needed new build homes. This includes introducing greater incentives for SME house builders to start developing more properties.

“It’s encouraging that all three main political parties now recognise the vital role of SME house builders and now accept that we will never meet the demand for new homes without more of these firms building a greater proportion of our homes,”

Berry continued. “Key issues which must be addressed in the short and medium-term include improved access to finance for small firms and the importance of local authority planning departments having the resource they need to do their jobs properly.”

Berry also pointed out that the construction industry, which includes housing, is vital to the health of the UK economy – for every £1 invested in construction, 92p stays within the UK.

“Construction is also central to delivering the Government’s key social and environmental aims which is why we hope policy makers take on board all of the proposals contained within the FMB’s “Programme for Government,” he added.

One of the biggest obstacles to increasing the supply of new build properties is the lack of skills shortages across the construction sector, according to the FMB.

Berry said, “As the shock waves from the latest economic downturn continue to reverberate through the construction sector, concerns over diminished workloads have been replaced by concerns over skills shortages. This time last year, only 27 per cent of firms were struggling to recruit bricklayers – that figure now stands at a sizeable 42 per cent. For carpenters and joiners, the figure has nearly doubled with 23 per cent of firms reporting issues in Q4 2013 and 44 per cent of firms now saying these tradespeople are hard to come by. We’re also seeing a rising and significant shortage of roofers, plasterers and site managers.”

The skills time bomb has arisen for a number of reasons. It is estimated that around 400,000 construction workers left the industry since the downturn hit in 2007 and many will never return.

While acknowledging last week that the FMB is working hard to help address this skills shortage, Brandon Lewis (left, Conservative), Emma Reynolds (Labour) and Stephen Williams (Liberal Democrats) had all agreed in the past that it is ultimately up to the Government to play its part to get Britain building more properties.

Mr Lewis said, “Our efforts have got Britain building over the past four years, creating thousands of jobs across the country.
“I want to make sure we maintain this momentum, and ensure British workers – whether those leaving school, leaving our Armed Forces or considering a return to the industry – benefit from the new career opportunities available.”

“With over 900,000 of our young people unemployed – we need to do better,” said Ms Reynolds. “I believe that an active partnership between the industry and a future Labour Government, can work to turn an emerging issue on skills, into a huge opportunity.”

Mr Williams (right) commented: “With the skills shortage prevalent in the construction industry, it’s even more important that companies drive apprenticeship programmes to provide the opportunity to equip individuals with valuable skills and training.”