Rents rose in 10 out of 12 regions last year, the latest data from the monthly HomeLet Rental Index reveals, but the headline figures mask some very significant regional variations, with certain towns, cities and regions registering much greater increases than others.

Rents on new tenancies signed outside of London in Q4 were 4.9 per cent higher than in the same period of 2014, HomeLet’s figures show; the figure for the capital was 8.0 per cent. As a result, the average rent on a home outside London now is £739; at £1,523 in the capital – it is more than twice as high.

As in previous years, Greater London saw faster rent increases than any other region, though the South-East wasn’t far behind, with a rise of 7 per cent. Rents on new tenancies signed in the East Midlands, the next best performing region, were up 6.4 per cent.

On the other hand, average rents fell by 5.1 per cent last year in the North-West and by 0.6 per cent in Northern Ireland. HomeLet has also studied rent increases in leading towns and cities across the UK, finding that Brighton and Bristol saw higher rent rises than any other locations last year: in both cases, rents signed on new tenancies were 18 per cent up compared to new tenancies signed in 2014.

The faster pace of rental increases in many regions of the UK meant that the gap between the rate at which rents rose in London and in the rest of the country was actually narrower last year. London’s lead in 2014 was 3.1 percentage points, compared to 6.9 percentage points over the previous 12-month period.

Meanwhile, the slowdown in the rate of rent inflation seen during the second half of last year, which saw rents fall back in some regions, continued during the final months of the year.

In fact, rents on new tenancies that were signed during the final three months of the year fell in eight regions out of 12 compared to the three months to the end of September. The West Midlands and Wales (where rents rose 1.0 per cent and 0.8 per cent respectively) saw the biggest increases, while Scotland and Northern Ireland (down 2.8 per cent and 1.8 per cent) experienced the largest falls. 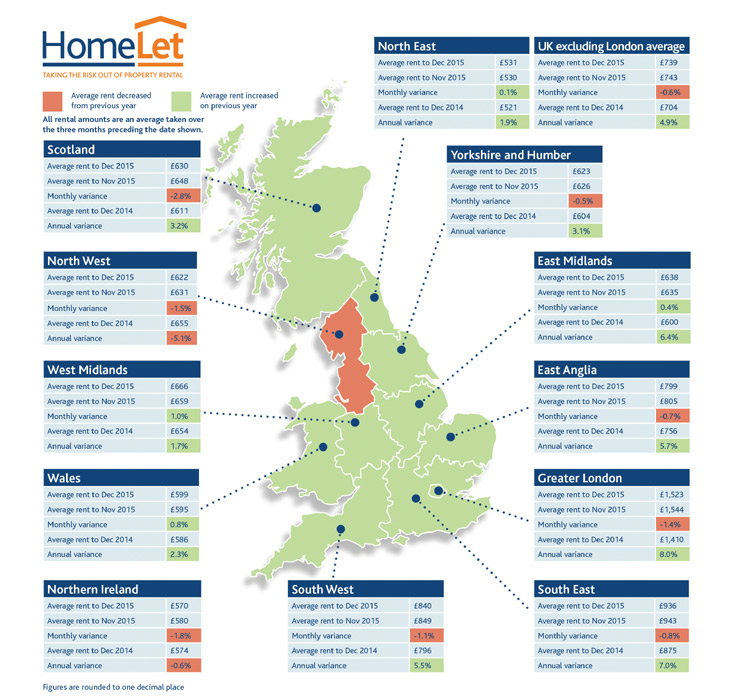