Sign in or Sign up
The essential site for residential agents
Home » Features » Agencies & People » Negotiator award: what’s it like to win?
previous next
Agencies & People

How do you feel winning a Negotiator Award? These winners say, “ecstatic!”, “shocked”, “fantastic”, “honoured” and “absolutely thrilled!”

The Negotiator Awards, in association with Zoopla Property Group, clearly mean a great deal to the winners. In this second group of winners, we hear why they decided to enter and just how much it means to them to have won.

There are an estimated 22,000 agency branches in the UK, so to be able to call yourself one of the very best is a great boost to a business when you win a Negotiator award.

Buyers, sellers, landlords and tenants are all impressed by industry accolades and being an award winning agency also attracts new sta while raising morale among your established staff members!

It’s not just about winning ‘on the night’ – it’s a lasting win-win-win for your company. Read the winners’ comments and start thinking about your entry for this year’s Negotiator Awards, to be held on Tuesday 5th November 2013 at the same fabulous venue: the Hilton on Park Lane!

Had you entered the Negotiator Awards before?
This was the first time that we have entered these awards, so it was both a fantastic achievement and a complete surprise for us to walk away with the silverware!

What made you decide to enter?
Naturally because we wanted to win! Aside from that I have read The Negotiator since I first started in estate agency – more than two decades ago – and always regarded the magazine as the definitive agency publication, which for me brought additional kudos to winning. In addition as the awards are – unusually – free to enter I felt that this meant that the competition was likely to be stiffer making the victory all the sweeter.

How long did it take to complete your entry?
I obviously don’t want to give too much away about the processes I go through, as I’d like to retain our title (!), but it took a couple of days to create the bulk of the entry. However due to the stringent criteria that you clever fiends impose the real skill of the entry is then to whittle your submission down to the correct amount of copy, as there is a tendency to pad them out by waffling on a little.

Were you ‘confident’ – or even ‘sure’ that you would win or was it a complete surprise?
Naturally I felt that we had created and submitted a strong entry, although having not previously entered I had nothing to benchmark it against. I also felt that with a shortlist of 15 agents that the standard would be very high and was hoping for a podium finish. However on the night I quickly realised that only the winners were called up on to the stage and so any early bravado quickly evaporated!

As the Awards are free to enter, the competition is stiffer and the victory is sweeter.” Peter Maskell Brock Taylor

What were your feelings on the night when your name was announced as a winner?
My colleague, Josh and I were sharing a table with the Williams Hedge team, so when they won the Best Newcomer award it was great to see their joy at winning, however this then meant that the pressure was on for us to perform too. My immediate feelings were that it was unlikely that two winning agents would share one table and so any prior confidence quickly disappeared at this point. As our category got closer I started to suffer from PAT (pre award tension) and noticed that my hands were getting a little sweaty and my heart was fl uttering (although this may have been heartburn from the calorific dessert). For our category the other two agents’ details were announced first and so I thought we’d missed the cut, so when our name was the final short listed agent my heart skipped a beat. Then Jon Culshaw stated that the winner sounded like an American sports commentator and I immediately realised we’d won – which was brilliant. 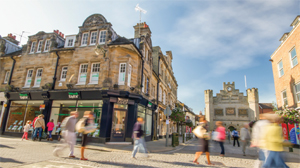 How did your staff react to the news?
I was totally unprepared so managed to quickly tweet our success, call my wife and then my phone died, so it wasn’t until the next day that I got a lot of feedback. Naturally everyone was really chuffed, as we really didn’t know what to expect. Although only two of us attended I believe that anyone who bumped into us on the night should be able to confirm that we did celebrate for the whole office!

Have you issued a press release about your success?
Yes, having won the award we wanted to shout about our success. We did this by creating editorials for all the local papers in the area. This followed other recent successes and so the message certainly got out there that we had won. We also send out a monthly email newsletter to a few thousand subscribers and so featured it within this publication too.

Have you already incorporated your ‘win’ into your marketing materials?
We created an advert that featured our success that appeared on the back page of the local papers, in addition to a 10ft high advert we have on Horsham station. We also have three one metre high awards pictures in our office windows; have it featured on our home page, promoted it via Twitter, Facebook and anywhere else we could think of. We are in the process of updating our company brochures, email signatures, headed paper and business cards and our success will be heavily promoted within these too. So the answer is a massive yes!

What benefits do you believe the accolade will bring you?
It is an obvious business differentiator between us and our competitors, and raises our profile in and around the local area. It will open doors for us and also create new business opportunities. We are in the process of  creating fresh marketing literature to target specific market segments where we believe this success will provide us with a competitive marketing advantage as well.

Would you recommend other agents to enter The Negotiator Awards?
Yes, as long as they are not in our category, as we’d like to win again!

Will you enter the 2013 Awards?
Definitely and it would be nice to remember the whole evening next time too!

RISING STAR OF THE YEAR

What made you decide to enter?
The Negotiator Magazine and Awards are highly regarded within the industry, and to win an award is a fantastic achievement. When the categories were published, David Smith (Director of Martyn Gerrard) suggested I (Daniel George) be entered for the category of ‘Rising Star’. He felt that because of my achievements over the past two years since I joined, Martyn Gerrard warranted such an award.

How long did it take to complete your entry?
It took about two hours to compose each of the entries for the different categories. After this there was a number of tinkering sessions to ensure the entry was perfect.

My initial feeling was amazement, followed by jubilation. To say it made my year is an understatement.” Daniel George Martyn Gerrard

Were you ‘confident’ – or even ‘sure’ that you would win – or was it a complete surprise?
It came as a complete surprise when my name was read out by Jon Culshaw – looking at the other nominees it was a very strong fi eld and it was very satisfying to come out on top.

What were your feelings on the night when your name was announced as a winner?
My initial feeling on the night was firstly amazement followed by a big dose of jubilation. To say it made my year is an understatement.

How did your staff react to the news?
My team and the company as a whole were very pleased for me. People are still congratulating me.

Have you already incorporated your ‘win’ into your marketing materials?
Yes, in our Quarterly ‘Property Review Magazine’ we had a feature about the Awards. This magazine is delivered to over 100,000 properties in the areas of North and North West London in which we operate.

What benefits do you believe the accolade will bring you?
Winning the Award has raised my profile with people within the industry and new clients outside of estate agency.

Will you enter the 2013 Awards?
As a company Martyn Gerrard Estate Agents will be entering a number of different categories for the 2013 Awards. Hopefully with the constant improvements and innovations we are making we will be able to move up from being Highly Commended to Winners in the categories we enter.