Savills prime central London team has been bolstered by a new appointment as James Gilbert-Green joins a director in Savills Sloane Street office, from Strutt & Parker where he was a partner.

Having operated in the locality for over a decade, James will concentrate on sales in prime areas around Sloane Street. He has previously been involved in some of the most notable transactions in Knightsbridge and Belgravia. His stand-out deals include multiple sales at One Hyde Park and record-breaking multimillion pound sales in London’s golden postcodes.

Head of London Residential, Jonathan Hewlett, said, “James has strong credentials and a brilliant sales track record, we are delighted to have him on board. Our team includes the most knowledgeable in the industry and James’s appointment reflects our commitment to becoming the clear market leader across prime central London through an unrivalled network of offices and a dedicated London Private Office. We welcome James to our expanded team.” 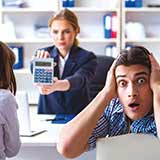 We take a look at the temperature of the property finance market and discover some worrying effects of the COVID-19 crisis.