Times and processes change, it's time for quick-build new homes. 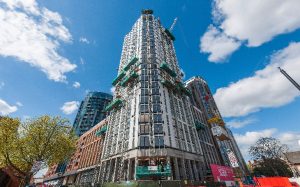 New world prefabs could solve our housing crisis, say the experts – and we’re not talking about the future – we’re ahead of the game in the UK.

Europe’s tallest modular (formerly known as prefabs) tower is now complete – and it’s in north London. The 29-storey structure is a student accommodation scheme developed by Tide Construction and Vision Modular Systems with 679 modules that will be ready for students to move into in September. The development will also include communal facilities, such as a cinema and a courtyard.

The total build time was just 12 months, with the modules stacked up in just 13 weeks to the height of 90 metres. Designed by architects HTA Design LLP, the building has a BREAAM rating of Excellent.

Apex House will be the fourth modular scheme that Tide Construction and Vision Modular Systems have completed in Wembley. Christy Hayes, CEO at Tide Construction, said, “We are delighted that both the Housing Minister Gavin Barwell and London Mayor Sadiq Khan have made off-site construction a priority in the capital to help ease the strain on London’s housing supply. Modular construction provides a much faster alternative to traditional construction without compromising on the quality of the building, or the versatility of the design. Modular produces 80 per cent less waste, requires fewer onsite workers and provides certainty of cost and time. Each module is manufactured at Vision’s factory in Bedford where the furniture, windows, electrical wiring and plumbing are all installed before the modules are transported 60 miles to the site in Wembley.

The government has pledged that 100,000 of the 1 million homes built by the end of parliament (this could be revised on 8th June…) will be delivered by modular methods and it pledged a further £285 million for accelerated construction techniques through the National Productivity Investment Fund.

Vision has also handed over two finished blocks in Lambeth to Pocket Living, an affordable housing provider that only sells to first-time buyers. The properties were constructed inside a factory in Bedford using production-line techniques more reminiscent of a car factory than a construction site. This allows for better quality control, faster delivery, reduces wastage and allowing for high levels of energy efficiency. 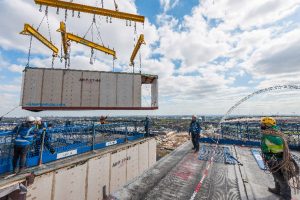 Kieran White, Managing Director at Vision Modular Systems, said, “We’ve been in this industry for more than a decade, and our building technology has allowed us to be at the heart of driving forward new forms of housing. Partnering with Pocket Living on multiple projects has allowed us to deliver vital new housing for first time buyers and key workers who underpin the very fabric of our cities.”

Located on the China Walk Estate, just a few minutes walk from Lambeth North and Westminster tube stations, each apartment has been built according to Pocket’s award-winning design specification. All of Pocket Living’s buildings are community focused, with shared spaces, such as roof terraces, where residents can meet and relax. At Juxon Street, residents will also have access to a walled courtyard with benches and trees.

Marc Vlessing, Chief Executive of Pocket Living, said, “Getting high-quality homes built quickly is key to solving the housing crisis. Modular techniques will play an increasingly important role in meeting this challenge and, through our partnership with Donban and Vision Modular, over a quarter of Pocket’s future pipeline will be built through modular construction.

“For modular to really take off as a viable construction method, the Government and lenders should look at making it easier for SMEs to access the working capital needed to take advantage of its benefits.”