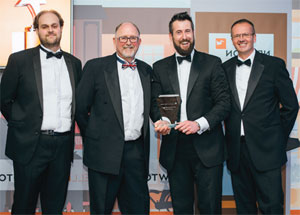 The announcements were made at a black tie dinner for members of the fast-growing Midlands estate agency network, which now stretches from the West Midlands to the east coast of Lincolnshire.

Jason Treadwell said, “From a cold start opening in Stamford in 2014, when we went head-to-head against 19 high street-based estate agents, we are now outselling our nearest competitor by double the number of sales. Independent figures show we have a 28.4 per cent of the sold market. Our nearest competitor stands at 14.2 per cent.”

Said Franchise Director David Spackman, “We now have 45 branches, and the conference is a great opportunity for everyone to share and learn from what’s happening elsewhere in the group, as well as setting out the strategy for the year ahead.”