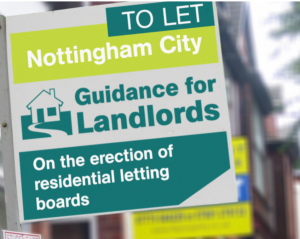 The City of Nottingham has been given the green light to continue severely restricting the use of To Let boards by agents for a further five years, after it was claimed that a previous control order led to a reduction in crime.

Originally introduced by the council in 2012 via a five-year Regulation 7 Direction order, Nottingham has now successfully applied for a second order from Savid Javid’s Ministry of Housing, Communities and Local Government

The extended scheme will come into operation on 19th February.

Boards must follow strict design guidelines and can only be erected from January to September each year. Also, only one board per building is allowed, and agents can only erect one board in a street.

Nine roads in a mainly student area of the city will now continue to be policed by the new regime, and any agent wishing to put up such a board outside of its rules will require the permission of the council to do so on a case-by-case basis.

The decision follows a site visit by a planning inspector to the area affected by ‘board blight’ who agreed with the council that a further five-year control order was needed.

The council says 561 non-compliant boards have been reported to it by members of the public since 2012. Following notices being served on the agents involved, all were removed.

It has also been reported that crime in the streets covered by the Regulation 7 Direction has reduced because properties with To Let boards outside are more likely to be targeted by burglars, it was claimed by a local HMO action group.

“This has been the best thing to happen in my ward,” local councillor Dave Trimble (pictured, left) told The Nottingham Post. “The streets have become much tidier and the environment has become better for both permanent residents and students.”