Over the past 12-18 months rising house prices have been driving auction revenues skywards and the figures below show this trend continues with gains of 6, 12 and 15 per cent in the monthly, quarterly and yearly total raised comparisons.

EIG’s David Sandeman (right) commented: “Activity in the residential auction market was largely comparable to November 2013, with lots offered slightly up [1.5 per cent] and lots sold marginally down [-1.9 per cent] on figures for 2013. The residential total amount raised increased by over 12 per cent in the monthly comparisons, and over 14 percent in the quarterly and yearly comparisons – the third consecutive month that we have seen double-digit rises in this regard.”

Auction House saw an improved success rate of 76.2 per cent in November with 144 properties sold, raising a total of £12.9 million, the company’s latest figures show. In total, the firm achieved 2,659 sales in the first 11 months of 2014 with over £312 million raised.

Auction House’s Roger Lake said: “To have posted cumulative sales up by over 15 per cent this year is really gratifying. It also shows that the auctions market is healthy and strengthening, which is good news for both sellers and buyers.” 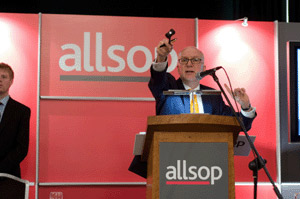 Allsop sold 185 properties at their last residential auction of the year last week, raising £56.6 million with a success rate of 82 per cent. This brings the residential total of the year to £421 million compared to £336 million last year.

Speaking after the sale, Auctioneer Gary Murphy (left) commented, “2014 has been an extraordinary year for us. December’s sale was particularly active. Despite the recent hikes in stamp duty, demand for higher value lots remained steady.”

This has also proved to be another successful year for Sutton Kersh, with the Merseyside firm selling 517 lots at its seven auctions in 2014, which produced total revenue of about £39.7 million.

At its final sale of the year last week Sutton Kersh sold 80 percent of the lots offered and generated proceeds of over £6.4 million.

Auction Manageress, Cathy Holt (right), commented: “2014 was another highly successful year in which we consistently attracted large attendances and delivered strong results on behalf of our customers.”

Eddisons raised total proceeds of around £58 million from its 2014 auction programme, following completion of the three-day December sale.

Throughout the year the firm staged 19 auctions in Leeds, Manchester and London selling 622 – 73 per cent sales success – of the lots offered. At the December sale 76 lots sold, generating over £8.5 million.

Simon Bailey, Director and Auctioneer at Eddisons, said: “It is clear that auctions remain an effective route to market, particularly where the true market value is largely unknown.” 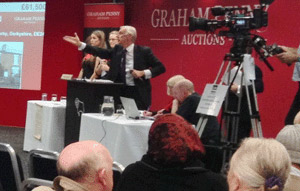 Graham Penny Auctions Derby also concluded its 2014 auction calendar this month, ending the year on a high with its latest auction helping the firm total over £34 million in sales in 2014.

The auction, at the iPro Stadium saw 35 varied residential and commercial properties, land and other lots sell under the hammer in front of a packed room of bidders and the BBC’s Homes under the Hammer TV crew.

Graham Penny (left), Auctioneer at Graham Penny Auctions, commented: “It’s wonderful to know that we are achieving the best prices for our vendor clients and demonstrating that selling by auction is a valid and profitable method of sale.