A lack of non-new housing stock is driving a boom in off-plan sales, according to statistics from Hamptons International. 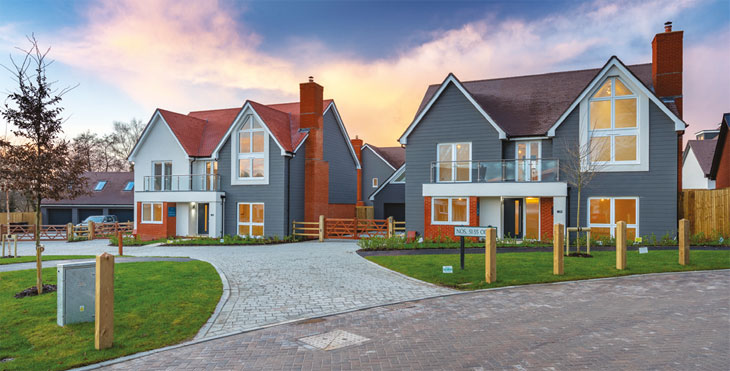 Research by Hamptons International has revealed that 37% of new homes sold in 2021 found a buyer before being built – the first rise since 2016.

The key findings of the research were:

· Rising off-plan sales were driven by more people buying houses before they were built, while fewer flats were sold off-plan in 2021 than in 2020.
· For the first time since 2007, terraced homes were more likely to be bought before completion than flats (chart 2).
· Last year buyers handed over a record £1.1bn in deposits to secure homes before they were built.
· Between 2020 and 2021, smaller schemes with less than 10 homes saw the largest increases in off-plan sales.

The rise in off-plan sales has been driven by more houses (rather than flats) being sold before completion – 24% of new detached home completions in 2021 were sold off-plan compared to 21% in 2020. This figure rose from 31% to 33% for semi-detached properties and from 41% to 45% for terraced homes.

However, the proportion of flats sold off-plan fell from 50% to 44% meaning for the first time since 2007, a terraced house was more likely to be sold off-plan than an apartment.

This shift meant that flats comprised just 37% of all homes sold off-plan in 2021, down from a recent peak of 53% in 2016 and a larger peak of 69% in 2008 (chart 3). Today, off-plan purchasers are increasingly likely to be owner-occupiers seeking houses rather than flats. This stands in contrast to pre-2016 times, and before the 3% Stamp Duty surcharge on second homes was introduced, where off-plan sales were firmly driven by flats sold to investors.

With houses increasingly likely to be sold off-plan and stock levels lowest in the country, the Cotswold District saw more new homes sold off-plan than anywhere else in England and Wales. Here, 86% of new homes completed last year had been sold before they were built.

Commenting David Fell, Senior Analyst at Hamptons, said, “The lack of second-hand homes available to buy has meant that owner-occupiers are increasingly turning to new builds, with more willing to buy off-plan in the face of limited options on the market. Typically, these are chain-free homeowners who have more flexibility on moving dates. Despite this, owner-occupiers don’t buy as far in advance as investors who are often happy to wait a year or two, particularly when prices are rising. They’re also more likely to seek out bespoke, individually designed houses in smaller schemes, rather than flats in big city centre blocks.

“After nearly four years of falls, the rise in off-plan sales will provide respite for developers looking to maintain sales rates as Help to Buy winds down. Whether this shorter-term shift has the potential to turn into a longer-term trend remains to be seen, but unlike the past, it’s owner-occupiers rather than investors who are likely to continue driving off-plan sales in 2022.”